With family roots in construction dating back to the 1970s, it was a natural progression for Adam... 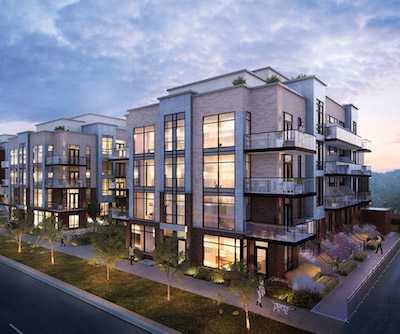 With family roots in construction dating back to the 1970s, it was a natural progression for Adam Taverna to get into the development game by forming Crown Communities in 2014.

The Concord, Ont.,-based company has a small but growing team of 10 people in-house and it utilizes the talents of a group of consultants.

“When we first set out to do development, we began focusing on smaller, boutique projects that hovered at around 50 units,” Taverna told RENX. “We plan to continue diversifying our yearly portfolio by building a mix of both high-rise and low-rise development sites in the GTA and surrounding areas.”

Crown Communities’ target demographic for its developments is young families who want to live in the Greater Toronto Area in a space that can accommodate growth, but who can’t afford downtown Toronto prices.

“When I’m designing a unit type, I really try to look at things from a buyer’s perspective,” said Taverna.

“I ask myself: ‘Would I be able to live here comfortably with a family? What can I shift around so that I can accommodate another bedroom for perhaps another child? How can I allow for more green space so that people can spend quality time outside?’

“We really emphasize a community aspect here, because that’s ultimately what we do best: create incredible communities and build spaces that people are proud to live in and proud to call home.”

“Typically, lowers are seen as dingy basements, as they’re dug out and have very little window space,” Taverna explained.

“I saw the opportunity to recondition the way we conceive lower units and they have been incredibly successful at this project.

“This unit type affords the opportunity for buyers to have multi-level living space, plenty of prime window space and a fantastic balcony that overlooks our courtyards.”

The architecture was inspired by New York City’s Greenwich Village, which accounts for the project’s name. The rest of the suites range in size from 450 to 1,700 square feet and in price from $700,000 to $1.2 million. Many units have large backyards, balconies, rooftop terraces and underground parking.

Seventy per cent of the seven brick condominium buildings with 28 traditional and 125 stacked towns are sold. Construction is expected to begin in the next few months and the projected occupancy period is the spring of 2022. 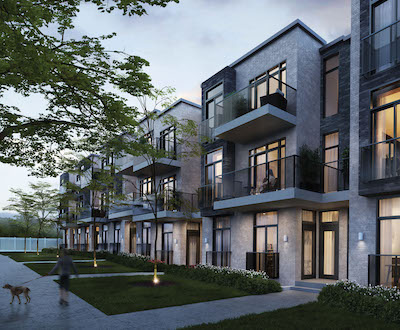 Two-bedroom suites range in size from 850 to 1,200 square feet and in price from the low-$700,000s to $1.2 million. Units have balconies and illuminated walkways are part of the professionally landscaped grounds.

“It’s elegant, tasteful and is the perfect option for people who seek a quiet neighbourhood feel, but still want to be in close proximity to whatever they may need,” said Taverna.

Eighty per cent of the units are sold and the projected occupancy period is late 2021.

While Crown Communities won’t release more detailed information until later this year, it has two other projects in its pipeline.