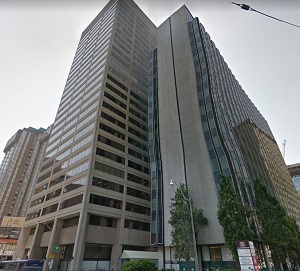 The new owners told RENX in an interview they plan both physical improvements and a new leasing strategy in order to maximize returns on the buildings.

Crown investments partner Emily Hanna said her company and Crestpoint were attracted by “the opportunity to acquire an entire city block in downtown Toronto within walking distance of two subway stations” where it could “clearly add value on the operational, leasing and physical fronts.”

NWHP REIT (NWH-UN-T) will redeploy the net proceeds from the sale into deleveraging and capital recycling initiatives.

“We worked with the existing lender and the vendor to effectively assume existing debt,” Hanna said of the transaction.

The acquisition was made by Crown’s Realty IV Limited Partnership and Crestpoint’s Core Plus Real Estate Strategy Fund. The two companies are 50-50 partners in investing in Dundas-Edward Centre.

This is the second investment made by the Crown-Crestpoint partnership. They jointly acquired Allstate Corporate Centre in Markham, Ont. for $148.5 million from British Columbia Investment Management Corporation two years ago.

Crown will manage Dundas-Edward Centre, which is 92 per cent leased.

“Some major tenants include the Ontario government, Northwest Healthcare Properties and admin offices for the nearby SickKids hospital,” said Hanna. “The complex has a diverse mix of tenants, including those who benefit from proximity to the nearby hospitals, courts and exceptional transit access.”

Several value-enhancement initiatives will be undertaken at Dundas-Edward Centre under Crown’s supervision, including: modernizing and upgrading lobbies and corridors; introducing the WorkFit by Crown fitness concept and other on-site amenities and services; and maximizing the functionality of the parking structure. Exterior improvements are in the planning stages.

Hanna said the upgrades will cost several million dollars and transform Dundas-Edward Centre into a “best-in class asset that accommodates discerning tenants’ needs.” She stated there will be minimal tenant disruption during the renovation process.

In addition to physical improvements, Hanna said a new leasing strategy will be introduced at Dundas-Edward Centre to add to its value.

“The plan is to introduce the complex to the brokerage and leasing community at large. The previous owner was focused on healthcare uses, and we believe that the property’s advantageous location within close proximity to two subway stations would appeal to a broader mix of tenants. Model suites will roll out beginning in the second quarter, offering move-in ready units from 3,000 to 5,000 square feet.”

Crown, founded in 2001, is an integrated investment and management firm that acquires, manages and develops commercial real estate assets in Canada. It has acquired more than 8.5 million square feet of assets and has billions of dollars of assets under management.

Crown’s fund used to acquire its share of Dundas-Edward Centre has more than $234 million of committed capital to invest and is actively seeking opportunities that fit its value-add investment mandate.

– With files from Don Wilcox