Crown Realty Partners has grown from five employees 15 years ago to 101 today, and managing partner Les Miller says it’s people that have driven the company’s prosperity. 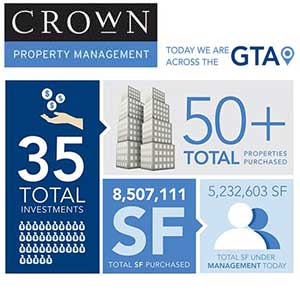 “The staff that we’ve hired have all had an entrepreneurial spirit and been customer-focused and had a true appetite to succeed.”

Of course the above market returns that Crown has earned for itself and its investment partners, prompting return business, has also enabled the commercial real estate firm to purchase more than 50 properties encompassing 8.51 million square feet and valued at more than $2 billion across the Greater Toronto Area (GTA) since inception. Today it manages 5.23 million square feet of space occupied by 560 tenants and some 16,500 employees.

Crown primarily invested in office buildings that needed physical capital repairs in its early days. But now service improvements have become a much bigger part of what it does with acquisitions so that its buildings better meet the needs of tenants.

Sustainability and environmentally friendly features have grown in prominence just as the size and complexity of projects that Crown has become involved with has increased. The company has converted warehouse to office space and gutted and torn down buildings as part of redevelopments to meet the rising demands of what tenants want in their workplaces.

“It’s becoming a tenant recruiting tool,” said Miller. “We’ve almost taken a page from condo developers and what they need to do to attract sales.”

While there have been ebbs and flows in the GTA office market over the past 15 years, demand has generally kept up with all of the new construction that’s been taking place. Crown has evolved to become an important player in this environment.

“We’ve gone into class-A complexes in the suburbs, which I don’t think Crown would have contemplated in the past,” said Crown leasing and marketing partner Scott Watson, noting the company’s investments in Markham.

“It’s a growing suburb where some of the buildings are in need of some tender loving care and some repositioning to get them to attract tenants and retain and grow the tenancies that are in there.”

Crown took advantage of this with its property at 901 King St. W., a 250,000-square-foot, eight-storey class-A building acquired in 2011 in partnership with another Canadian investment fund. The building was strategically repositioned and branded after physical improvements and additional services and amenities were introduced.

A new tenant signed on for 20,000 square feet within 90 days of closing and an additional 110,000 square feet were leased within the first year. The building is now 98-per cent occupied and attracting creative businesses to its Liberty Village area location.

Crown’s newest purchase, announced on Wednesday, is a four-storey, 146,000-square-foot office property at 2233 Argentia Rd. in the Meadowvale Business Park that was acquired from a client on behalf of its Crown Realty III Limited Partnership fund. Crown has managed the property for the past five years and in 2014 it earned LEED Gold certification, The Outstanding Building of the Year (TOBY) Award at BOMEX (in the 100,000- to 249,999-square-foot category) and the National Outstanding Building of the Year Award in the same category.

Major tenants including Brink’s, Expedia, Intertek, Regus and SunOpta have relocated to the building in the past three years, attracted by abundant on-site parking, a café, a common tenant meeting room and plentiful storage. Crown plans to renovate the lobby to provide new collaborative zones for tenants to work from.

Crown also announced this week that it closed on the disposition of Britannia Common at 220-262 Britannia Rd. E. and Matheson Woods at 391-415 Matheson Blvd. E. in Mississauga. These properties, comprised of 13 single-tenant office buildings, were acquired by Crown on behalf of its Crown Realty II Limited Partnership fund, which is now fully divested with the exception of two assets.

“As we look to the future, you’ll start to see us look outside the Toronto marketplace and into areas like Ottawa and Kitchener-Waterloo to try to extract value out of those markets and give tenancies the same things as we have been in Toronto that have worked very successfully,” said Watson.

Forecasting Crown’s next 15 years, Miller says the firm will likely expand on its primary office base and add a wider range of property types to its portfolio. He sees it as a natural extension of what Crown has done through its first decade-and-a-half.

“We’ve beefed up our staffing to deliver it on a larger and broader scale, but we’ve always thought that execution, operations and customer service were our core. And we continue to keep to that core.”