Despite president and CEO Ken Silver’s contention “that being a boring REIT is not a bad thing,” CT REIT has come off an uncharacteristically exciting year, racking up a total of 16 acquisitions, three developments and 10 intensifications in ongoing developments for a total cost of $598 million. 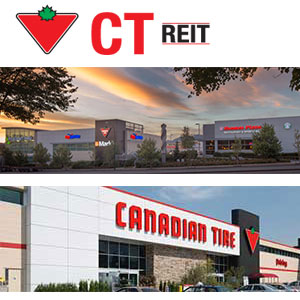 That’s more than double the typical $250 million or so CT REIT (CRT.UN-T) has spent annually in enlarging its portfolio since retail giant Canadian Tire Corp. spun off the real estate trust in 2013.

“Those were two larger than typical transactions for us,” said Silver. “We also bought a couple enclosed malls in some smaller markets that we thought were great fits and great opportunities for the REIT.

“I would say it was a balance of executing on what I would describe as our normal growth program supplemented by some out of the ordinary transactions.”

The trust’s portfolio is comprised of more than 300 properties of more than 24.7 million square feet of gross leasable area.

CT REIT is by design boring and predictable. It gets first dibs on Canadian Tire’s massive land holdings and to date, about half of its acquisition stream comes from within the chain’s network and much of the rest comes from sellers who have leases for Canadian Tire stores.

Having insider knowledge of the performance of Canadian Tire store performance and markets gives the trust a distinct purchaser’s advantage over potential competitors.

The trust knew the CT assets were strong performers, the market was solid and the mall overall was underperforming. It made the purchase and just last week Winkler was singled out by the Globe and Mail as a fast growing market.

“One of the learnings since we went public was how valuable that relationship with Canadian Tire is to the REIT . . .  as a source of growth, as a source of market insight.”

He added: “Through Canadian Tire, we have a great opportunity to screen opportunities from coast to coast and understand what markets are growing, where retailers are being successful, and have that inform our growth strategy.”

A developing story for REIT

Silver does not see a repeat of 2016 this year, with acquisitions dominating its growth strategy. Instead, expect more of a focus on development.

“We are gradually building the depth of our development pipeline.

“That has two benefits: we should be able to generate better returns through development than on acquisitions based on valuations in the marketplace these days and second of all, assuming market conditions are relatively stable . . . it is  a little bit more of a predictable growth vector.”

He doesn’t expect CT REIT to be alone with this strategy. “I think a lot of REITs are looking more towards development than they have in the past because it is a tougher market in which to make accretive acquisitions.”

And if CT REIT is a bit dull in comparison to its REIT peers, it doesn’t bother Silver.

“Our mantra is predictability and it doesn’t make for the most exciting story day-to-day. But we are focused on building a track record that investors understand and certainly have appreciated since our IPO.”

CT REIT added more than 3.1 million square feet of GLA in 2016, including 1.8 million sq. ft. of GLA completed in the fourth quarter.

Credit goes to increased net operating income, mainly relating to acquisitions, fair market value increases and a reduction in net interest and financing charges which more than offset an increase in general and administrative expenses.