A Calgary developer of luxury storage space is planning to expand its unique idea across the country. 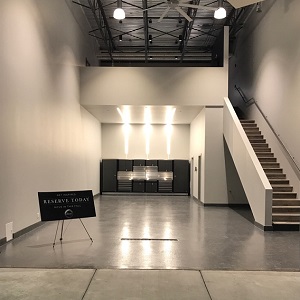 The Vaults is creating customized, luxury storage condominiums which also allow owners to showcase property such as vehicles, boats, RVs and other valuables. (Image courtesy The Vaults)

The Vaults provides secure condominium space for cars, boats, RVs and other valuable belongings. Amenities include a private on-site clubhouse and a fully-equipped wash bay. The owner’s space is personal and customized for their storage needs.

James Murray, vice-president of The Vaults, which is owned by private investors, says “our belief is people love what they’re storing.”

“It’s not a utility where people are just storing their stuff. They’ve got a little bit of lifestyle around what they’re storing,” says Murray. “They really want to have space where they can enjoy their cars. Stand back and work on it a little bit. Tinker with it and showcase it. Just have some good space for it.

“There’s good mezzanine space where it would allow them to hang out with some friends and family. Have a couple of beverages. Really creating that space that’s inspirational for them.”

The Vaults Stoney Corp. is the Calgary-based company behind the project. Formed in 2013 by founder and president Joe Mahovlich, it was established specifically to create this project with an eye to both expansion on-site and into new markets.

The Calgary location is at 1750 120th Avenue N.E. just north of the Calgary International Airport and west of major roadway Deerfoot Trail. The development is on 2.88 acres with 43 units in the project over five different formats ranging from 1,650 to 4,000 square feet.

Phase One is complete. Phase Two is being built with completion expected by the end of this fall. There will be four phases in total with separate buildings but all will be connected. The entire project is expected to be completed by the end of next year.

“It’s not a new concept. It’s been around North America for over a decade now,” says Murray, adding the company looked at many existing concepts and wanted to improve and enhance the idea when it developed The Vaults.

Murray says the north Calgary location will be a model scaleable both from a design point of view as well as for branding.

“Really understanding the people who are looking for solutions. Today, people are storing their stuff in a lot of places. They may not know that a solution like The Vaults exists for them,” he says.

“We absolutely have aspirations to take this across the country. Revelstoke (B.C.) is a spot that we do have land. South Calgary we looked at different sites. There’s one we really like. We have not secured that yet. But we do have a lot of interest for South Calgary.

“Toronto and Winnipeg have good interest for us. We’re really making sure we’ve got our formula right for The Vaults in Calgary. We’re really pleased at how it’s progressing.”

Calgary auto dealer Tony Dilawri, of the Dilawri Automotive Group which operates the Distinctive Collection of luxury vehicles, says many people have facilities to house their cars at their homes but the concept like The Vaults appeals to those people who might not have that capacity.

“There are people that have quite the car and storage collection that they would like to keep and usually what we find is they will use a place like The Vaults . . . and store the cars there for awhile and as they move and build their next house usually what they do is build a 10-car garage that goes with it as well. It’s a great concept.

“And Alberta is such an amazing place to drive (luxury) vehicles,” says Dilawri.

Vancouver-based Hungerford Properties has also launched TROVE – the city’s first lifestyle condos for cars and collectibles. It is a private owners’ club offering secure, individually-customized, luxury storage spaces for automobile aficionados and collectors, focused around a community of like-minded individuals with a passion for cars.

It will feature 45 drive-up units on two storeys with the opportunity to transform warehouse space into personal urban hangouts, workshops, private offices and luxury garages. It is scheduled for completion in 2019.

“It is the first of its kind in Vancouver, and with Vancouver as the No. 1 per capita luxury supercar market in North America, we are confident it will be popular amongst buyers and investors who share a passion for cars,” says Michael Hungerford, a partner in Hungerford Properties.

“As such, TROVE will be much more than storage; rather, it will be a network and community of elite car lovers,” .

There is also a clubhouse at the facility to be located in Richmond across from the auto mall.