The Daniels Corporation has unveiled its Accessibility Designed Program (ADP) for condominium purchasers who use mobility devices, the latest move in its commitment to building homes for the full spectrum of the housing market. 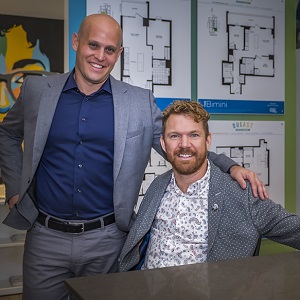 “Our mission has always been to try to eliminate barriers to home ownership, be they financial or in this case physical,” said Daniels vice-president of project implementation Jake Cohen.

Luke Anderson, a universal design advocate who uses a wheelchair, did a roll-through of one of Daniels’ buildings and pointed out deficiencies and potential accessibility improvements that could be made in common areas and units. The Toronto developer listened closely to what he had to say.

The ADP is being launched this fall at two Daniels communities, with: 20 units in DuEast Condominiums, the newest residential offering within the 69-acre Regent Park revitalization; and 25 units in Wesley Tower at Daniels City Centre in the company’s 23-acre master-planned community in Mississauga.

ADP purchasers can select from one-, two- and three-bedroom layouts, many located on the ground floor.

“Our plan is to incorporate the ADP suites in every one of our condominium buildings going forward, and to build that number up based on desire and demand,” said Cohen.

These features will come already built and priced into ADP units. A kitchen upgrade with under-sink clearances, lower countertops, a side-opening oven with a pullout counter below the stove, a double-door fridge, a cook-top with knee clearance and a dishwasher drawer can be added for an additional $5,000.

Purchasers are encouraged to request further customization as well, according to Cohen.

The ADP will only be applied to new units and won’t be retrofitted into older ones, which Cohen said is cost-prohibitive.

The ADP will also incorporate mobility aids in the amenities, common spaces and building entrances of new Daniels condos. These features include such items as lowered concierge desks, accessible kitchens in party rooms, larger turning radii and waste chutes with automatic door openers.

The ADP was designed with the principles of the Accessibility for Ontarians with Disabilities Act in mind. It exceeds Ontario Building Code standards for barrier-free suites.

Coming up with the ADP was a collaborative effort, as Daniels’ design team worked with: accessibility consultants AccessAbility Advantage; Quadrangle Architects, a leader in universal accessibility design; and the aforementioned Anderson, the founder of StopGap Foundation, a charitable organization that designs and distributes ramps to stepped storefronts.

While the ADP offers obvious benefits to those with disabilities or mobility problems, the program makes sense for Daniels from a business perspective since it wants to be the go-to developer for people facing these issues.

“There’s really a strong demand for accessible suites due to a lack of supply,” said Cohen. “We’re hoping that incorporating these accessible design elements into buildings from the beginning is appealing to many purchasers in the housing market.”

ADP is just one of several innovations that Daniels — which has built more than 27,000 new homes across the Greater Toronto Area (GTA) over 34 years — offers to purchasers and residents of its properties.

Daniels FirstHome Communities are designed and priced specifically to make buying a home for the first time more accessible. The Gradual Deposit Payment Plan offers purchasers the opportunity to buy with five per cent down by paying $3,500 with the agreement of purchase and sale, and then $1,000 each month until five per cent or occupancy is reached.

The First Home BOOST program enables qualified purchasers to increase their down payment from five  to 15 per cent through an interest-free, payment-free loan. The Home Investment Program is available at Daniels’ “Gateway Rental Communities” across the GTA and offers tenants the opportunity to earn a credit of $200 per month (up to $6,000) toward the down payment on a new Daniels home.

“For people who are renting or haven’t purchased yet, or don’t have a huge nest egg that they’re sitting on, it’s easier for them to get into home ownership,” said Cohen.

“The reality is that access into affordable home ownership is challenging for everyone in Toronto. And for those living with a disability, it can be even more so.

Daniels does good in other ways

Daniels is also involved in environmental initiatives at its properties, including offering recharging spaces for electric cars and auto- and bicycle-sharing facilities. It harvests rainwater, installs low-flow faucets and dual flush toilets to significantly reduce water consumption. It encourages the use of reclaimed materials and artifacts in common areas and amenity spaces.

Urban agriculture initiatives are part of several Daniels communities across the GTA.

Daniels Spectrum is a 60,000-square-foot facility in Regent Park that hosts a range of culturally diverse programming and is home to innovative arts organizations. Daniels is a sponsor of the Toronto International Film Festival and TIFF Bell Lightbox, which it developed along with the Festival Tower and Cinema Tower residences.

Over the years, Daniels has supported hundreds of charities and non-profit organizations. This ranges from helping to provide the basic necessities of life, such as food and shelter, to providing opportunities in arts, culture, education and employment.

“We do a lot financially, but also a ton of hands-on stuff,” said Cohen. “I can’t put a dollar value on those sorts of things, but capacity-building is really what drives us and pushes us.”

Many of Daniels’ initiatives have involved partnerships with federal, provincial and municipal governments, corporations, educational institutions and community organizations.

“We find that the partnerships we create, and that we look for, can really enhance development and development opportunities for us because they may give us access to land or other opportunities that otherwise wouldn’t be there,” said Cohen.

“We’re big proponents of partnerships, but we like to take the lead on those sorts of things and drive the programs and issues. Then hopefully the partners will see the benefits at the end.”