There will be a significant mid-summer change in the executive suite at RioCan Real Estate Investment Trust (REI.UN). President and chief operating officer Raghunath (Rags) Davloor is stepping down to “pursue other opportunities” and will be replaced from within as COO by Jonathan Gitlin, the REIT announced Monday morning. 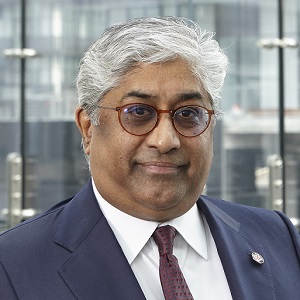 Rags Davloor will step down as RioCan president and COO this summer. (Image courtesy RioCan)

Davloor joined RioCan as its chief financial officer and moved up to president in 2014. His resignation will be effect as of July 31. Gitlin will take over on August 1, a promotion from his current role as senior vice president, investments and residential. RioCan says Gitlin will assume all of Davloor’s roles and responsibilities and will continue to oversee the trust’s investment and residential programs.

“Rags joined RioCan as the chief financial officer in 2008 during a time when the capital markets were incredibly volatile,” said RioCan chief executive officer Ed Sonshine in a prepared statement. “Together, we guided the trust through the turbulent times of the ‘financial crisis’ and Rags was a key contributor to RioCan’s successful growth during his tenure including the expansion and ultimate, well-timed sale of our U.S. portfolio.

“Rags has been a trusted and valued member of our executive team for the past 10 years and has left a lasting mark on our organization. I would like to thank him for his contributions and wish him continued success in the future.”

Prior to joining RioCan, Davloor held a series of senior positions with TD Securities, the former O&Y REIT, and Arthur Andersen Canada.

Gitlin joined RioCan in 2005 and has headed the investment team since 2007. He has played a major role in the growth of RioCan, including its move into the United States from 2009 to 2015.

He was a key member of the team which negotiated and executed the sale of that portfolio, repatriating $1.2 billion of capital in 2016. Those funds have supported RioCan’s further growth in Canada.

“I would like to congratulate Jonathan on his well deserved promotion to chief operating officer,” Sonshine said in the statement. “In his expanded role as COO, Jonathan will be a key contributor to RioCan’s future as we implement our strategic vision for continued growth.”

Gitlin also leads RioCan’s ongoing $2 billion disposition program of retail properties as part of its accelerated major market strategy. RioCan is disposing of properties in secondary and tertiary markets, as well as other sites deemed non-core, in order to focus on its key holdings in Toronto, Vancouver, Montreal, Ottawa, Calgary and Edmonton.

As an extension of that, Gitlin is also overseeing the execution of the trust’s residential program, adding residential and other mixed-use properties at many of its core shopping sites in those major markets.

Prior to joining RioCan, Gitlin worked for six years in the real estate department of McCarthy Tetrault LLP, a legal firm in Toronto.

RioCan’s portfolio is comprised of 284 properties, including 17 development properties, with an aggregate net leasable area of approximately 43 million square feet.