The first stage of the 2.9-million-square-foot downtown Toronto Bay Park Centre office complex that will house CIBC’s headquarters and a new GO bus terminal is set to break ground in June. 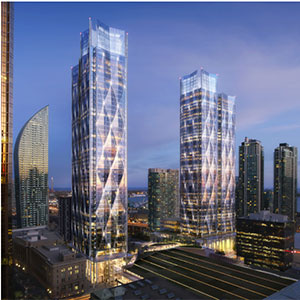 81 and 141 Bay St. as viewed from the Fairmont Royal York, from Bay Park Centre website

Ivanhoé Cambridge acquired a property at 81 Bay St. in 2007, subsequently added other parcels of land and the air rights over a rail corridor, and in 2014 entered an agreement with Metrolinx that it would purchase the nearby property at 141 Bay St. that houses the current terminal.

It would then build the regional transportation agency a new terminal on its southern site.

Ivanhoé Cambridge and new equity partner Hines announced on Wednesday they had acquired the final piece of the puzzle.

Ivanhoé Cambridge and Hines will be equal partners and investors in the project, currently called Bay Park Centre but set to be rebranded under a new CIBC-related name in the coming months. Hines, which was originally hired as the development manager of the now four-hectare site, will continue in that role.

CIBC is expected to occupy up to 1.75 million square feet of space, taking about 60 per cent of the south tower when it’s ready for occupancy in mid-2020. The newly relocated GO bus terminal should be operational around the same time.

“We need to relocate them from the north site into the new terminal in order to start the north building,” said Pearce. “And as soon as that occurs, we’ll break ground on the second tower. We anticipate delivering that towards the end of 2023.”

CIBC will also occupy from 35 to 50 per cent of the north tower. Approximately 15,000 CIBC employees from various business units are expected to move from other locations across the Greater Toronto Area to Bay Park Centre in order to foster a more collaborative environment and drive innovation. No lease terms were disclosed.

Ivanhoé Cambridge, Hines and Metrolinx will also renovate the Bay Street East Teamway and create extensions of the PATH pedestrian walkway system to the Air Canada Centre and Union Station.

Pearce said there are no other office tenant commitments yet, but the south tower is being actively marketed and has drawn interest. The north tower will be marketed later.

More than 4,000 construction-related jobs are expected to be created over the course of Bay Park Centre’s development.

“This is the first headquarters-quality building that’s been delivered to the downtown Toronto marketplace in probably 25 years,” said Pearce.

“A lot of the stuff that’s been built over the last seven or eight years in the last couple of development cycles has been smaller 700,000 to 800,000-square-foot buildings. They’ve been nice, but pretty regularly shaped glass boxes. We’re trying to do something on a much larger scale with really iconic architecture.”

Bay Park Centre’s signature amenity will be a one-acre elevated park above the rail corridor connecting the two buildings at the fourth floor level and featuring garden meeting rooms. It will be programmed by Biederman Redevelopment Ventures, which operates and curates activities in New York City’s Bryant Park.

Pearce said CIBC will also have input into what happens in the park. He expects seasonal offerings to include sports and entertainment as well as community and corporate events.

“We didn’t just want it to be an open green space with some planters and some grass,” said Pearce. “We wanted it to be a true amenity to our tenants and to the neighbourhood.”

Bay Park Centre will have a market-style eatery with indoor and outdoor seating that will offer a selection of nutritious and healthy food options, which are needed to obtain the WELL Building Standard.

A variety of other food options — including a white tablecloth restaurant, a more casual restaurant and a café — will also be part of the complex.

Ivanhoé Cambridge is a real estate subsidiary of the Caisse de dépôt et placement du Québec, one of Canada’s leading institutional fund managers. Through multiple subsidiaries and partnerships, Ivanhoé Cambridge had assets in North America, South America, Europe and Asia valued at approximately $56 billion at the end of 2016.

Hines is a privately owned global real estate investment firm with a presence in 20 countries. The firm’s property and asset management portfolio includes more than 213 million square feet of space at 533 properties. It also has 114 developments underway around the world.

“They have an excellent track record of executing large and complex development projects,” said Pearce.

Hines and Ivanhoé Cambridge have been partners for more than 15 years on developments including Tour T1 and B in La Défense and ARDEKO in Paris, Eighth Avenue Place East and West Towers in Calgary, and River Point in Chicago.

They’re also collaborating on the DUO project in Paris that should be completed in 2020.