The evolution of Calgary’s Deerfoot Mall into Destination: Deerfoot City took another step forward this month with the opening of a new 103,000-square-foot Canadian Tire. 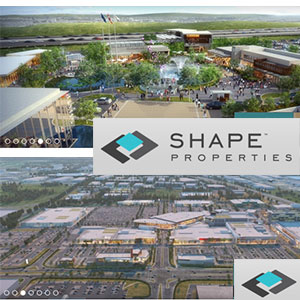 Images of Deerfoot City from a Shape Properties video

The store replaces the nearby location on Hunterhorn Road and sits on the south side of the 79-acre site under-redevelopment site next to a 70,000-square-foot Cabela’s hunting, fishing and outdoor gear outlet that opened last fall.

Vancouver-based Shape Properties purchased the property from Ivanhoé Cambridge in 2011. The redevelopment will almost double the leasable area to more than 1.1 million square feet for an undisclosed cost.

“While Deerfoot Mall was seen by most as a dated shopping mall, Shape recognized the site’s strong fundamentals,” said Shape executive vice-president of development and design Darren Kwiatkowski.

“This includes its strategic location, the size of the property, great exposure, access and egress. When we purchased Deerfoot Mall, we looked beyond the shopping centre and at the potential for a future mixed-use master plan.”

Kwiatkowski said there’s been a worldwide shift away from traditional suburban shopping centres and a trend toward vibrant social destinations with a large outdoor component and diverse mix of uses.

“This includes the growth of restaurants, a renewed focus on design and aesthetics, and combining activities like dining, working out, grocery shopping and entertainment. The future of retail brings together the energy of urban street-fronts with the thoughtfully laid out design of a master-planned community.

“While there is a strong retail presence in the Calgary market, none of the competitors offer this type of format. We see an opportunity to change Calgary’s retail landscape by offering a new and exciting shopping, dining and entertainment experience.”

Phase one tenants and The Rec Room

Half of a former Sears store that was vacated four years ago will be occupied by The Rec Room, while discussions are underway to lease the balance of the space.

Deerfoot City’s Rec Room is scheduled for completion in the second quarter of next year. It will include: an area with an assortment of amusement games and interactive feature attractions alongside recreational activities like pool, shuffleboard and ping pong; multiple dining options; a multi-level patio with outdoor fireplaces and bocce ball courts; a bar area with large high-definition screens; and an auditorium-style space for live entertainment, including comedy and musical acts.

Deerfoot City’s second phase includes the demolition of some of the former mall. The new space created by this will be divided into specialized areas and include the construction of Deerfoot Boulevard, a landscaped fashion high street that will showcase what’s being called the style district. Kwiatkowski said it has generated interest from local, national and international fashion retailers.

Deerfoot Boulevard will also include the food lodge, which will feature 16 units with outdoor seating, open-air fireplaces and an indoor/outdoor children’s play area.

Deerfoot City’s restaurant campus will feature food options ranging from quick and casual to fine dining. Its patios will surround a central plaza that will include a water fountain, landscaping and space for events and entertainment.

These developments are also part of phase two, which is underway and scheduled for completion about a year from now.

“Calgary has the highest GDP and spend per capita in Canada. Accordingly, we’re confident that there is a viable retail market for a fresh, new and unique offering with strong real estate fundamentals.”

Shape has two other major ongoing developments in Burnaby, B.C.

The Amazing Brentwood mixed-use development at the intersection of Lougheed Highway and Willingdon Avenue has sold out of its first three residential towers, encompassing 1,400 units. Sales for the next one will launch in the spring. The project will also include retail and office space.

“This 28-acre project is set to become a sophisticated shopping, dining, social and residential community unlike anything Metro Vancouver has seen,” said Kwiatkowski.

“Phase one, which includes the first residential tower, the renovation of the shopping centre and the one-acre signature plaza that will be directly connected to the SkyTrain plaza, is projected to be completed in Q3 2018.”

The City of Lougheed

The City of Lougheed will be Canada’s largest master-planned community, according to Kwiatkowski. The 40-acre site is currently occupied by the Lougheed Town Centre at the intersection of Lougheed Highway and Austin Avenue, an eight-minute drive from Simon Fraser University.

“We’ve launched for previews of the first residential tower of the first neighbourhood, with plans to sell before the end of 2016,” said Kwiatkowski.

“Phase one, which encompasses the first four towers and 1,568 homes, includes a retail podium at the entrance to the site with a lifestyle grocery anchor, market-style tenants and cafes and restaurants. It’s scheduled to be completed in Q2 2021.”