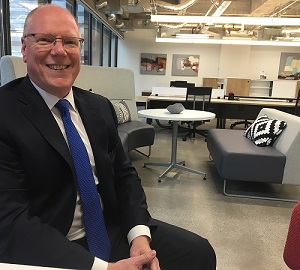 Ian Parker of Brookfield Properties, in the DesignHive at the Royal Bank Building in Calgary. (Mario Toneguzzi photo)

“I saw this in our L.A. office and our Houston office and thought given some of the difficulties in the Calgary marketplace, it would be a good opportunity to showcase what can be done in a classic downtown office building for tenants looking for creative, different kind of space,” said Parker.

“We’re seeing tenants have the opportunity to return to the downtown core. It really is the easiest place for individuals and their employees to get to.

“You’ve got the greatest set of amenities for the employee base and pricing has become affordable again.”

The downtown Calgary office market has seen elevated vacancy rates due to the collapse in oil prices that began in late 2014, causing recessions in 2015 and 2016 in the city. Although the economy has bounced back, albeit at a slow pace, the vacancy level remains elevated in the neighbourhood of 25 per cent.

Designers Kasian Architecture, Shearer Design and Zeidler Architecture were each invited to build a suite, of about 4,000 square feet, for a tenant looking for modern, collaborative, creative, unique space in the marketplace, said Parker.

“I think they all hit it out of the park,” he said. “At present we’re building out a floor of spec suites in Brookfield Place at the same time. It’s about the marketplace. The larger tenants in Calgary aren’t as active in the marketplace today, but we are seeing a lot of returning tenants to the downtown core.

“And if you can make that decision to come into fit-out space easy for them by having premises ready, those kind of premises are moving in the market. We want to head into that marketplace.”

He said the idea was to create some “buzz” around what can be done in a typical class-A office building.

Brookfield Place is the latest downtown Calgary office tower at 56 storeys and 1.4 million square feet. The anchor tenant is Cenovus Energy, which originally leased about a million square feet in the development. The company is expected to move its employees from the Bow Building sometime in 2019. Parker said the tower is 91 per cent leased with an average lease term in excess of 12 years.

“We’re just finding other creative ways to continue to chip away at that existing vacancy,” he added. “We’re really operating in two markets now, Toronto and Calgary. . . . And Toronto’s market is the complete opposite of Calgary’s today.

“It’s more like what Calgary was in 2006 and 2007. Vacancy is extremely low there so we don’t really need to create this kind of environment to foster the demand.”

Parker said it’s been a tough three or four years for the downtown Calgary office market, but the city is seeing a return to the core as Beltline and suburban tenants find their way back downtown.

“We’ve got some major economic hurdles still in front of us, but Calgary’s got a can-do attitude that at the end of the day is going to see us through this. We are a cyclical economy with the focus on the energy industry, so you have to plan for that and hopefully hit it well.”

Erin Gardiner, an associate with Shearer Design, said Brookfield’s objective in the DesignHive showcase was to design the office space of the future.

“We set out to design something that we wanted to showcase to our potential clients, our current clients  . . . what could be if you worked with us,” said Gardiner.

“This adds a sense of excitement and value to the real estate industry that isn’t there, because a lot of people can’t see what a space can be when they see it in a concrete shell and a lot of times they don’t necessarily have the time, the patience or the money to do this kind of development.

“And even when you engage an interior design firm and a contractor and negotiate the lease of a space, it can be overwhelming for a smaller company that would be fitting into this size. So having this kind of space be readily available in this size is really key for this time.”

Karen Iredale, an associate for interior design at Kasian, said the goal was to take a blank slate and create an office that would be lease-ready in the Calgary market.

“The whole design premise of this space was a choice of how to work and where to work, so we can accommodate in this space anywhere from 20 to 32 people depending on their work styles,” she said.