Devimco Immobilier says the City of Montreal is dragging its heels on giving the go-ahead to its... 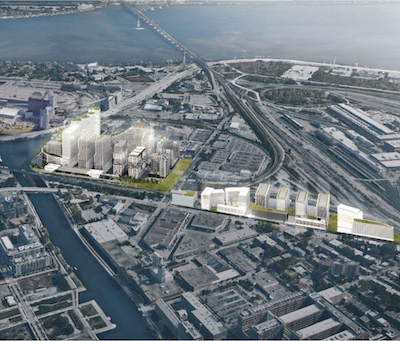 Devimco’s proposed $2.5-billion Peel Basin mixed-use redevelopment. The firm has banded together with other Montreal developers to complain about growing bureaucracy, restrictions and delays in the approvals process by the City of Montreal. (Courtesy Devimco)

Devimco Immobilier says the City of Montreal is dragging its heels on giving the go-ahead to its proposed $2.5-billion mixed-use redevelopment in the Peel Basin area of Griffintown near downtown.

The developer’s project would include 4,000 residential units, of which 1,000 would be family-sized. It would also have 800,000 square feet of office space, labs and exhibition rooms as part of a proposed “innovation zone” and 200,000 square feet of community space and restored industrial heritage buildings.

It would be located in the Peel Basin (also known as Bridge-Bonaventure) sector of Griffintown and cover an area of five million square feet. The former industrial site represents the largest territory in Montreal slated for rezoning and the biggest site available for development near the downtown.

Devimco owns half of the land slated for the development. The other half is owned by Canada Lands Company.

Devimco president Serge Goulet said the project has been in the city’s hands since 2018 and has been the subject of public consultations from the city’s Office de consultation publique de Montréal. He spoke to reporters during a Dec. 7 virtual news conference from his chalet in the Beauce region of Quebec.

Montreal’s lack of a decision “is wasting the effects of a major project like this” on rejuvenating the city’s economy during the pandemic, he said.

Goulet said the city will not present its development plans for the site until June 2021 and that a municipal election will follow next November, all of which could delay development for years. The project would be built over a 10-year period.

“All of the steps have taken much longer than what it usually takes,” he said in an interview with RENX.

As it now stands, Devimco’s development excludes a proposed baseball stadium at the site. However, Goulet said plans could be changed to allow a stadium to be built and “we would have to readjust the project and its functions.”

In 2019, Devimco and Stephen Bronfman, executive chairman of Claridge Inc. agreed to build a 32,000-seat stadium at the site should the Montreal Expos return to Montreal. Bronfman is leading a group trying to bring the team back to Montreal.

Residential units at the proposed development would be a 50-50 mix of condos and rentals and 1,000 units would be family-sized. Buildings would have a maximum height of 25 storeys.

Goulet said the project would respect Montreal’s new bylaw proposed for April that would require a 20 per cent mix of social, affordable and family housing in new residential projects.

However, the bylaw’s timing, coming in the midst of a pandemic, “is really bad” for development, he said.

He also called for construction of a second REM light-rail station in Griffintown at the project site.

Goulet said the current planned REM station in Griffintown, to be called Bernard-Landry-Griffintown, will be located in an already developed area, and will not generate any fees from developers.

However, he estimated the division of the Caisse de dépôt et placement du Québec pension fund that is developing the REM would collect $200 million in royalty payments from a station at the Devimco site. The collected funds would pay for the additional station.

The City of Montreal has already decided in favour of an innovation zone in the Peel Basin, he noted.

Goulet said the project would include restoration of the former Wellington Basin, which has been covered up over the years. “It’s a reminder of the important industrial heritage of the past.”

Goulet, the Urban Development Institute of Quebec and 12 other signatories sent an open letter to Montreal Mayor Valérie Plante on Dec. 1 decrying what they say is a growing number of restrictions, an increasingly heavy bureaucracy and long delays in approving developments by the city.

Groupe Mach, Broccolini, Cadillac Fairview, Devencore and COGIR Immobilier were among the other signatories.

The letter called upon the city to create a group combining public and private sector actors to together define a coherent strategy for the downtown area.

Goulet said the issue will be discussed further at a Chamber of Commerce of Montreal conference Wednesday on development strategies for downtown Montreal.

Devimco is building Solar Uniquartier, Quebec’s largest TOD project, on the South Shore of Montreal, as well as Square Children’s at the former site of the Montreal Children’s Hospital.

Although condo sales are “mediocre” downtown during the pandemic, Square Children’s and MAA are 100 per cent sold, and Maestria is about 75 per cent sold.

“Happily, we’re not in a risky situation because we had very, very good sales performance.”