A request for qualifications has been issued for a large mixed-use transit hub at Victoria and King streets in Kitchener, Ont. that’s expected to play a major role in the evolution of the area and the “Toronto-Waterloo Region Corridor.” 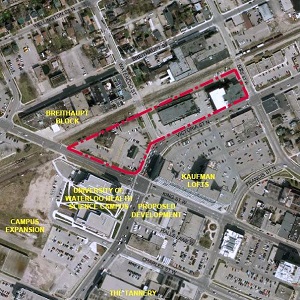 The Region of Waterloo will sell a four-acre property to the selected private master developer, which will then build both the transit hall and accompanying buildings.

“It’s right in the downtown core, so you have pedestrian movement, bicycle movement and everything else,” said project director Ellen McGaghey. “It’s literally the natural spot for this to happen.”

The site will also incorporate public spaces and transit support areas, including parking, pick-up and drop-off areas, bus bays, and links to trails and paths. On-site buildings will include residences, offices and stores.

“What we’d like to see there is a mix of residential, commercial, office space and retail so that it really becomes a living sub-community unto itself,” said McGaghey. “Our goal is to make sure that we’ve got true integration and true connectivity and that there’s as much mixed-use development there as the market will bear.”

An overpass or underpass will be built to connect Waterloo Street to the property. Three concepts have been developed to get a sense of what’s possible, and a final choice will be made later in the design process.

The site was consolidated after parcels from different owners were acquired and assembled over the past several years. It’s zoned for a maximum of 1.29 million square feet of density, and McGaghey is hopeful there will be healthy competition to acquire it.

Things for developers to consider

The request for qualifications will close on June 30 and a short list of successful applicants for the final request for proposals will be announced by September.

“We’ll select the highest-scoring proposal and then expect them to deliver on what they’ve proposed,” said McGaghey.

Completing the transit hub is the first priority, and that’s expected to occur in 2021. McGaghey estimates full build-out of the site could happen by 2027, though that’s more flexible.

The existing train station is located close by, though on a different property. No decision has been made on what will happen with it once the new hub is built.

Some facades and interior components of the Rumpel Felt building, at the Duke Street end of the property, have a heritage designation that will need to considered by the winning developer. Newer portions of the former manufacturing facility, currently being used by the Region of Waterloo for storage, could be torn down or redeveloped.

“It can present some interesting opportunities for developers because we know that everybody loves these warehouse spaces and their connection to history,” said McGaghey. “So I think there’s an advantage there as opposed to a limitation.”

The 112-kilometre “Toronto-Waterloo Region Corridor” is a global centre of talent, growth, innovation and discovery, and the second-largest technology cluster in North America.

Toronto is Canada’s corporate headquarters and its centre of finance, industry-led research and development, health and life sciences, and venture capital.

Waterloo Region has the second-highest density of startups in the world, along with the headquarters of some of Canada’s largest tech companies and development offices for leading global brands.

Google has two offices within a short walk of the transit hub site, of which McGaghey said: “This is a physical representation of that innovation corridor and will help people move from Toronto to Waterloo Region.”