Toronto-based industry group REALpac has a busy slate of activities for 2016, but taxes (and bureaucratic red tape) are the one subject sure to elicit a reaction from CEO Michael Brooks. 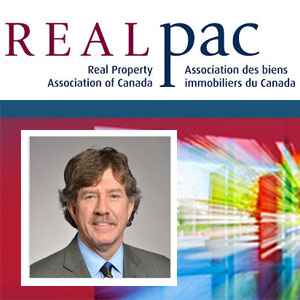 “The big issue and it was part of REALpac’s submission to the Ontario government is the incredible delay in getting anything approved in the City of Toronto and the high taxes, development fees and charges,” he said.

“It is amazing how much it costs to get anything done in the city.”

In 2015, REALpac was part of the successful opposition to the Ontario government’s proposal to allow municipalities outside of Toronto to levy their own land transfer tax, a funding scheme that has created a “double” land transfer tax in the country’s largest city.

Despite this recent victory, Brooks sees little appetite on the part of City of Toronto’s politicians and bureaucrats to tackle the issue of ever-rising taxes on development.

“The politicians and the urban planners think that it is a bottomless pit. They just keep piling taxes onto real estate and they don’t realize that business is going elsewhere.”

The same situation exists in U.S. cities where Brook says it is quicker to secure building permits and build than in Toronto.

Toronto vs other jurisdictions

In 2016, REALpac plans to profile a current commercial real estate development in Toronto to compare taxes and development charges to other North American cities.

As part of the case study, the association will chronicle all the costs the development incurs and contrast it with similar projects in other jurisdictions.

“We have long known about all of the fees and charges in the city but no one has ever added them up,” Brooks said, while adding there are also high development charges in other Canadian cities such as Vancouver and Montreal.

Taxes are only a part of the more than 30 issues on REALpac’s advocacy agenda.

The organization’s full-time in-house staff, who have expertise in lobbying and real estate, advocate and monitor on behalf of the industry locally, nationally and internationally Brooks said in an email to Property Biz.

On the international stage, REALpac has been involved in the reform of FIRPTA, the U.S. Foreign Investment in Real Property Tax Act which imposes income tax on foreign persons disposing of American real property interests.

REALpac has settled issues pertaining to International Financial Accounting Standards and established a standard for FFO, a initiative that is a benefit to REALpac members every financial quarter.

It is monitoring European and American accounting practices and capital markets as well as the development of the new international property measurement standards.

Nationally, in 2015 REALpac helped to bring about changes to the federal government’s procurement policies and the public service Integrity Framework, an initiative that will continue into 2016.

Federal policy would have allowed the government to exit contracts and agreements with real estate firms if there was any hint of wrongdoing on the part of individuals even remotely associated with those companies until changes were made due to pressure applied by organizations including REALpac.

Brooks said REALpac will continue to engage with the federal government on a number of sustainability policies and is “pleased” about new announcements concerning promotion and funding for energy efficiency of industrial, commercial and residential buildings.

Brooks’ current position as a special advisor to the United Nations Environment Program Finance Initiative – Property Working Group allows him to “keep an eye” on developments in the sustainability field.

REALpac is also involved in carbon pricing and cap and trade discussions with government at the federal and provincial level.

At the provincial level

In Ontario, REALpac is leading the industry response to the province’s mandatory energy data disclosure program, to be released in 2016 or 2017.

It is also actively consulting with the Ontario Securities Commission and the Toronto Stock Exchange regarding the future of regulatory change and opposing the elimination of the vacancy rebate tax credit currently worth “millions” to landlords in Toronto alone.

REALpac is also seeking to play a part in Alberta’s Municipal Governance Act reform “to build better development and land use planning policies into the legislation directly.

“It will strive to include provisions such as those found in the Ontario’s Bill 73, Smart Growth for Our Communities Act, as it now requires reporting and quantification of some of the taxes that are extracted from our members,” Brooks said.

On the education front, the group’s new Real Property Investment Certificate program was a “great success in 2015” backed by growing industry demand for training and will be expanded this year.

REALpac’s co-ownership with Informa Canada of RealCapital, RealLeasing and RealREIT conferences and industry sponsor of the Toronto Real Estate Forum will also continue.

New to REALpac’s event commitments are supporting Informa Canada‘s rolling out of the new Global Property Market to be held in New York in June and to serve as a partner to the Canada Green Building Council’s annual conference, Building Lasting Change.