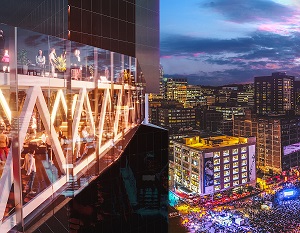 MAESTRIA will comprise two towers, 51 and 53 storeys high, containing about 1,000 condominium units, 500 rental apartments, plus retail and commercial space in a 51,000-square-foot, lower-level extension. It will have access points from Jeanne-Mance, De Bleury and Sainte-Catherine Streets.

“We are proud to be building a distinctive, avant-garde property that will help enhance the urban fabric of this booming arts and culture district,” said Devimco Immobilier president Serge Goulet in a release Thursday. “With this landmark project, we intend to maintain the Devimco tradition of creating a living environment with mixed uses that will serve project residents as well as visitors to this highly popular part of Montréal.”

In addition to a long list of amenities for the residents, the two towers will contain a first for Montreal, the developers say.

“The design includes, at the 25th-storey level of the towers, the highest walkway between two buildings ever to be built in Montréal, where residents will enjoy a prime view onto every major event held in the Place des Festivals below,” Daniel Arbour, senior partner at Lemay architects which designed the structures, said in the release.

He called MAESTRIA “a nod in the direction of the Quartier des spectacles, a project with a powerful identity and a unique signature, with the two tall towers seemingly in motion, like a pair of tango dancers.”

The 25th-floor Skybox will be a private loge and terrasse which will overlook the Esplanade des Festivals / Places des Arts complex and public area. Flanking the Skybox will be two Skylounges which provide access to the loge itself.

Construction is slated to begin by the end of 2019, with marketing of the units starting in February.

The design of the two thin, angled towers was inspired by the arts and culture vibe of the Quartier des spectacles. The partners call it one of the “most strategic sites of Montréal’s entertainment district.”

“We displayed vision in acquiring the former Spectrum land and other adjacent lots, and the outcome today is that we are part of another structure-enhancing project for Montréal that will help drive the local economy,” said Normand Bélanger, president and CEO of the Fonds immobilier de solidarité FTQ development capital fund, in the release.

“As a reminder of the glory days of the Spectrum, we plan to incorporate some commemorative items, including a collection from the legendary concert venue’s archives.”

In another nod to the heritage of the district, the development will feature a major work of art, measuring 12×40 feet titled Changer le monde. Created in 2010 by 1,500 young people at the Centre jeunesse de Montréal along with artist Bernard Séguin Poirier, Changer le monde has been acquired to “occupy a prominent location in the finished project,” Bélanger said.

In addition, the partners will donate $100,000 to promote children’s welfare. In collaboration with Séguin Poirier, $75,000 will be donated to the Fondation du Centre jeunesse de Montréal – Institut universitaire du CIUSSS du Centre-Sud-de-l’Île-de-Montréal to allow 1,000 young people to take art classes with the artist during the next three years.

The other $25,000 will go to Le Phare Enfants et Familles / The Lighthouse Children and Families, so 250 children receiving palliative and pediatric care at its residential facility can also receive art education from Séguin Poirier.

Residential units in the towers will range from 300 to 2,500 square feet. There will be 512 interior parking spaces, along with green spaces, an outdoor swimming pool, indoor pool with swimming lanes, spa, Scandinavian thermal pool and spa circuit as well as a 4,800-square-foot fitness room.

“We are enthusiastic about our partnership in this major project, which promises to be a true masterpiece: an emblematic building complex in the Quartier des spectacles,” said Pierre Pelletier, senior vice‐president, opportunity and development funds, Fiera Properties, in the release.

In 2017, Devimco sold one-third of all new residential condos purchased in downtown Montreal.

Fiera Properties offers a complete range of investment strategies for its investors including an opportunity and development component whose mandate is to establish development partnerships with the largest Canadian promoters. As of Sept. 30, Fiera had $3B of assets under management, of which more than $600M are located in Quebec.

The Fonds immobilier de solidarité FTQ promotes economic growth and employment in Québec through investments in residential, office, commercial, institutional and industrial projects of all sizes. As of Dec. 31, 2017, the Fonds immobilier had 47 projects in progress, 53 properties under management, 14 million square feet of land for development and $69 million allocated to affordable, social and community housing.