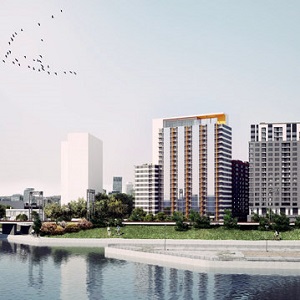 The 22-storey building is part of Devimco’s District Griffin project, which it has been developing since 2005, mostly comprised of condominiums in the former industrial neighbourhood south of downtown.

The building will be next to the original 15-storey L’Hexagone which has 257 rental apartments.

“From the beginning, we knew there would be a Phase 2,” says James Goulet, who is responsible for residential and rental properties at Devimco. “Since the first phase was successful, we’re going to 320 units.”

Slated for occupancy in spring 2019, L’Hexagone 2 will offer studios and one-, two- and three-bedroom units on its 28,000-square-foot lot. There will also be 22,500 square feet of commercial space on the ground floor.

The building is located at the corner of Smith and Murray Streets. It will provide easy access to the Bonaventure and Ville-Marie expressways and to the Champlain Bridge.

Building the two rental towers is part of a plan “to diversify the housing offer in this highly sought after Montreal neighbourhood,” said Devimco president Serge Goulet in a statement. “Our goal when designing these two phases of L’Hexagone was to create a haven for Montrealers, cyclists, runners and hikers by building near Old Montreal, the Lachine Canal and the Atwater Market.”

Normand Bélanger, president and CEO of the Fonds immobilier de solidarite FTQ, said in a statement the Fonds is capitalizing on the “highly successful”  L’Hexagone, which reached high occupancy a year after its launch. The second phase will help address the shortage of quality dwellings in the neighbourhood, he said.

Designed by the architectural firm FABG, the building will have a somewhat different look than its sister building next door.

As it is visible from the Bonaventure Expressway, L’Hexagone 2 marks somewhat of an entry point to the city, Goulet says, “so we want signature architecture.”

In addition, there will be more family-friendly three-bedroom units than in the original L’Hexagone, as that configuration proved to be popular in the first project.

The building will feature a “very generous” lobby in terms of size that will include features such as a coffee machine and a leave one/take one book library run by tenants. There will also be an exterior rooftop swimming pool, with a spacious terrace and barbecues.

No problems related to Airbnb

Goulet says the original L’Hexagone has not had a problem with tenants renting out their apartments on Airbnb to tourists – something seen in many condominium buildings in the downtown core.

“We asked Cogir if there was a problem with tenants renting out their apartments at sites like Airbnb.” The response was “It’s under control. We’re not Airbnb.”

Rentals will begin six months before the delivery of the first units at L’Hexagone 2 and there will be a leasing office onsite.

Rental rates were not divulged but will be in line with L’Hexagone, Goulet says. A two-bedroom, 829-square-foot unit on the eighth floor of L’Hexagone is currently on offer at $1,865 a month.