Construction is expected to start in August on Devimco’s $1.5-billion mixed-use Solar Uniquartier... 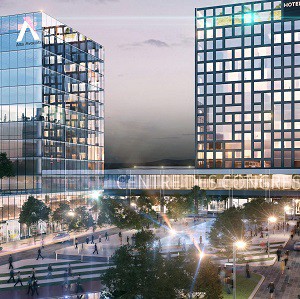 When it’s completed in 2027, the site will house around 4,000 residents and 5,000 workers. “It’s like a city,” says Mathieu Collette, vice-president – development and operations at Devimco.

Solar Uniquartier, which Devimco describes as the biggest mixed property project in Quebec, will be located at the northwest intersection of Highways 10 and 30. It’s near the Quartier Dix30, the 300-store lifestyle centre which was also developed by Devimco. A planned overpass will give residents easy access to the Quartier Dix30, located just across Highway 10.

It will become the first TOD (transit-oriented development) project in Quebec and will be set around the REM (Réseau électrique métropolitain), the new light-rail transit network financed by Quebec’s pension fund, the Caisse de dépôt et placement du Québec, that is slated for completion in 2021.

A REM station will be located onsite and the train will cross the new Champlain Bridge and head to downtown Montreal’s Central Station.

“People will be able to get downtown in 15 minutes – it’s the equivalent of living in the Plateau Mont-Royal neighbourhood but for a fraction of the price,” says Collette, referring to the trendy Montreal neighbourhood near the city’s downtown.

Although pricing isn’t finalized, condo prices will likely start at about $200,000, he says, making condos in Solar Uniquartier at least 30 per cent less expensive than equivalent condos in the Plateau Mont-Royal. Studios, one- or two-bedroom condos and penthouses will be available.

Solar Uniquartier is based on several years of thought about building an innovative project in tune with the newest trends in TOD areas, Collette says. The inspiration came from visits by Devimco executives to innovative projects in Vancouver, Portland and Seattle last year and to Washington, D.C., Atlanta and Boston this year.

Industrielle Alliance has confirmed it will lease one floor of office space at the development for more than 120 employees of its iA Groupe financier division. Office space will be divided among eight buildings.

“We hope to announce other tenants in the weeks to come,” Collette says.

The project has received construction permits and has met the city of Brossard’s criteria for sustainable development and 25 per cent of the buildings should receive LEED certification, Collette says. However, “we can practise ecological development without having to obtain LEED certification.”

More than 10 per cent of the land is being ceded to the city of Brossard for the development of public spaces.

A bike path and a walking trail will cross the site and a park the size of about three football fields will include children’s games, water sports and fountains, a vegetable garden and training circuits.

There will also be a public square lining the site that will rival in size Montreal’s Quartier des Spectacles (home to the city’s jazz festival, Just for Laughs and other events).

The project is being designed by architectural firms ACDF, LemayMichaud and FABG.

There is also symbolism in the name of the development. Collette notes the word Uniquartier in the Solar Uniquartier title combines the words unique and quartier (neighbourhood), and aside from referring to the sun, Solar contains the letters SLR – the French acronym for systeme leger sur rails or light rail transit (LRT).