Devimco Immobilier is planning a $3-billion project in the Griffintown area of Montreal, which would be the company’s biggest-ever development. 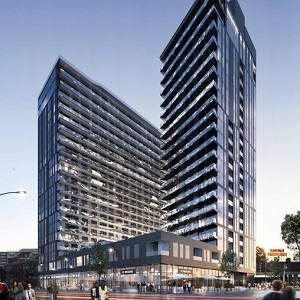 MaryRobert condos in Griffintown will be the site of a massive, 21-storey art installation. (Rendering courtesy Devimco Immobilier)

It will be “an extremely exciting” mixed-use project that will surpass the Devimco-created Quartier Dix30 and Solar Uniquartier in size, Devimco president Serge Goulet told RENX.

“It will be much bigger than Solar,” Goulet said during an interview at an event to unveil a 21-storey art installation at one of the company’s current projects. “It will be the biggest project Devimco has ever done.”

Goulet said the proposed Montreal project will be a transit-oriented development (TOD).  The city’s new automated light-rail train, the Réseau express métropolitain (REM), will run through Griffintown and the area will receive a  Bassin Peel station.

“What’s particular about this project is that it will be a job-creation hub,” he said. “Fifteen years ago, the anchor for major projects was the shopping centre.”

The proposed project, however, will be an anchor for employment, he said, without providing further details.

Devimco owns much of the site envisaged for the project, though it would require the demolition of existing buildings such as warehouses.

Goulet said Devimco has submitted the project to Benoît Dorais, the mayor of Montreal’s Southwest borough. Discussions have to be held regarding zoning and other aspects of the project.

“I have the impression that by the end of the year we’ll be able to announce it,” he said.

Griffintown, south of downtown Montreal, was once an industrial area. It has been transformed in recent years and is now home to a number of condominium and rental housing projects, many of which were developed by Devimco.

One such Griffintown condo development is the $170-million MaryRobert, a nearly 500-unit project which will break ground this month. Located at the corner of Peel and Wellington Streets, it consists of two, 21-storey towers to be built atop a 23,460-square-foot commercial centre.

Ninety per cent of the condos have been sold, making MaryRobert “one of the fastest-selling condo towers in Montreal last year,” Goulet said.

MaryRobert will be the site of the installation, a 21-storey, 203-foot high work of art which will be the largest for a real estate development project in Quebec. René Derouin, a well-known Quebec artist, won a competition to create the artwork.

The $700,000 artwork, to be integrated into the glass-paneled balconies of the four facades of the two towers, is titled “Un phare sur le fleuve,” and is inspired by the river, the city’s founding nations, the land and migration. It will be clearly visible on the skyline to motorists entering the city from the Bonaventure Expressway.

Units have sold at about $480 per square foot before taxes – about $100 per square foot less than equivalent condos downtown – and buyers have been predominantly young professionals, empty nesters and baby boomers, says Marco Fontaine, president of the advisory firm Premius Conseil and an advisor for the MaryRobert project.

Last year, Devimco sold one-third of all the new residential condos purchased in downtown Montreal, according to Altus Group data.

Of the 3,365 new residential condos sold in downtown Montreal in 2017, 1,050 were in Devimco’s EstWest condos at its Square Children’s site (formerly the Montreal Children’s Hospital), District Griffin (which includes several projects in Griffintown) and O’Nessy Condominiums in the Shaughnessy Village neighbourhood.

“Sales so far this year have not slowed down,” Goulet says. “We were curious to see what would happen in 2018 with the increase in interest rates, but the speed is still very good.”

Devimco has about $3 billion worth of projects underway, including a $500-million mixed-use project above the Longueuil–Université-de Sherbrooke Metro station in Longueuil on the South Shore.

To cover an area of one million square feet, the TOD project was originally slated to include 525 condos and rental units, a hotel, and office space as well as co-working spaces that could serve as incubators for start-ups and small- and medium-sized businesses.

However, changes to the project have been made during negotiations with the Montreal and South Shore transit commissions, Goulet says, and a new version of the development should be announced by the end of the year.

“Projects move forward a bit, then they change a bit. It’s normal,” he says.