DIRTT Environmental Solutions and NMG recently installed a two-storey state-of-the-art medical interior in three days for Arab Health Exhibition and Congress in Dubai, illustrating what their innovative approach to construction is capable of. 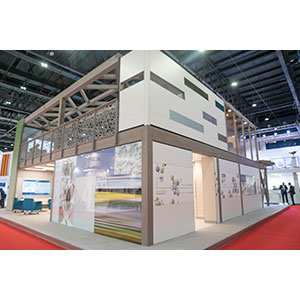 “When we’re done, we’ll tear it down and store the structure for another year or it will go to one of our partners,” said Scott Jenkins, president of Calgary-based DIRTT (Doing It Right This Time). “It’s reusable and nothing will be thrown out.”

Texas-based NMG is a design-build workplace solution provider that handles everything associated with a project on behalf of the owner, including conceptual design, space planning, procurement, installation and project management.

DIRTT was founded in 2005 and began trading on the Toronto Stock Exchange in November 2013. It started working with NMG, which is now its Middle East distribution partner, six years ago. The relationship has led to the manufactured construction of more than 70 healthcare projects in the Middle East.

Jenkins described one collaboration in Saudi Arabia that took three-and-a-half months from an initial demonstration to a final build. He said it would have taken a year with conventional construction using imported materials and a labour force from poorer countries, which is how most things are built in that part of the world.

“Clients in that region are getting much higher quality than they’re used to, and they’re getting it with speed,” Jenkins said of what DIRTT and NMG have to offer. “We think we’ve just scratched the surface of that region in terms of what’s possible, especially in healthcare.”

Arab Health is the second-largest medical expo in the world and the oil-rich countries in the region have been increasingly focusing their attention on developing world-class healthcare facilities. While the event presented opportunities to communicate with existing and potential clients in person, video and photo blogs posted from the site on the DIRTT website have shown people around the world what it’s doing.

“We expect significant momentum and lead generation and further revenue growth in the Middle East and throughout the DIRTT world because of what we’re doing at Arab Health,” said Jenkins, who added the company has grown by between 30 and 40 per cent since 2015.

That growth isn’t as fast as it could have been, however, since Jenkins said it can still be difficult to convince some people of DIRTT’s merits as they’re so set in their ways when it comes to construction.

“We believe we are disrupting the construction industry with technology. When you’re a disruptor, sometimes things take a little more time because construction is something that all people think they know,” said Jenkins.

“But they also know that it’s predominantly late, the quality isn’t what they hoped for, and they know the price they get on a construction quote isn’t what they’re going to pay. But they just grin and bear it. We’re solving those challenges, but people can still be afraid of change.”

DIRTT’s proprietary 3D ICE software shares similarities with that used in cutting-edge video games and enables the configuration, engineering, architecture and design components of projects to be handled in real time. Jenkins said it had to wait for hardware manufacturers (including Samsung and the Facebook-owned Oculus) to catch up with its technology.

Now that it has, Jenkins expects DIRTT to piggyback on to the billions of dollars being invested in virtual reality technology in the video game industry.

Jenkins thinks this will also create opportunities for DIRTT to move more into the residential construction market and expand its customer base from the corporate, government, education and healthcare sectors.

DIRTT’s manufacturing facilities are located in Phoenix, Ariz., Savannah, Ga., Kelowna, B.C. and Calgary. It has “Green Learning Centres,” where customers can see its technology in person, in nine North American markets as well as in London, England and Singapore.