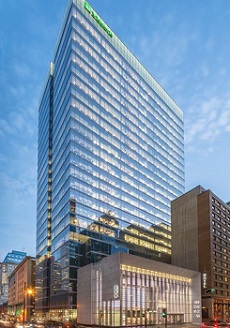 The $220 million class-AAA building at 900 de Maisonneuve Boulevard West is 83 per cent leased at opening with major tenant Manulife occupying more than 260,000 square feet of office space on 11 floors. EY and Boralex are the other major tenants.

Owned jointly by Ivanhoé and Manulife, Maison Manuvie officially opened on Monday, with executives and government officials on hand. The building has 485,800 square feet of leasable space, including 8,500 square feet of retail space.

“We’ve owned this piece of land for 12 years and we always meant to develop it as an office building,” Poliquin says. “I mean, the sign was on the corner for many years.”

The site between Metcalfe and Mansfield Streets was one of the last vacant lots in the financial district. It last operated as a parking lot behind the Simons department store on Ste. Catherine Street and next to the Le St-Martin Hôtel Particulier (formerly Ben’s Deli).

Soon after it acquired the Canadian operations of Standard Life, Manulife announced in 2014 it would invest in Maison Manuvie, as well as signing a lease agreement as its first major tenant.

“Manulife was looking for a new destination to consolidate their operations,” Poliquin says. He notes the new building “has a very strong impact and bearing on changing the culture of an organization,” for two companies that are merging. “The environment is conducive to helping Manulife create a new personality.”

As a rule, office space in new prestige properties in downtown Montreal leases for $60 per square foot gross, Poliquin says.

Part of the retail space has been leased to Materia Prima, a local Montreal cafe.

“We just didn’t want to go with the big branches you find everywhere and essentially offer the same type of offering,” Poliquin says. “We wanted something that was really a Montreal signature.”

About 6,000 square feet of retail space is still available for a business-class restaurant.

During the opening ceremonies, Michael Sabia, president and CEO of the pension fund Caisse de dépôt et placement du Québec, said Maison Manuvie “stands as a symbol of Manulife’s commitment to Montreal and Quebec.” Ivanhoé Cambridge is the real estate division of the Caisse de depot.

Kevin Adolphe, president and CEO of Manulife Real Estate, noted the building has gone from concept to completion in just three years.

“We are proud to have this building as Manulife’s new Quebec headquarters and a strategic holding within our commercial real estate portfolio.”

Manulife is one of Quebec’s 100 largest corporations with a network of more than 8,000 advisors and 2,000 employees throughout the province.

Maison Manuvie is built to LEED CS Gold certification standards and is the first building in Quebec with a WiredScore Platinum certification.

The office tower features state-of-the-art technology for everything from elevators to air conditioning, Poliquin says, and use-as-you-need floor areas. There is direct access to the Peel and McGill Métro stations.

Maison Manuvie has six floors of above-ground parking for 360 cars, which “enables us to have the first office floors high enough to get plenty of natural light even on the lowest office occupancy floors,” Poliquin says. There are also nine-foot, floor-to-ceiling windows on each floor.

Poliquin says the building is innovating by adding a ground-level bike facility with 125 places, change rooms, lockers and showers. “Cyclists do not have to share an entrance to a parkade with cars, so it is safe. That’s a major innovation that we are very proud of. I think we’re going to see more and more of that in Montreal.”

A commemorative plaque has been installed in the lobby to signify the building is located on Mohawk ancestral land.

Part of $1B Projet Nouveau Centre

Maison Manuvie is part of Ivanhoé’s Projet Nouveau Centre project, which involves $1 billion in investments in its downtown Montreal properties.

Other key aspects of Project Nouveau Centre include $200 million in renovations to Place Ville Marie announced last week, renovations to the Fairmount The Queen Elizabeth which concluded last summer and renovating the Montreal Eaton Centre and connecting it to the adjoining Complexe Les Ailes.

Poliquin says Ivanhoe is always looking for opportunities for new office buildings. As with Maison Manuvie, “the key to being able to launch new projects is having the tenant that is looking for a solution and a partner, and matching the two.”