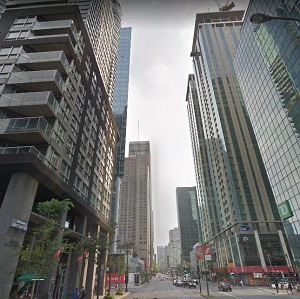 That’s because large blocks of contiguous space greater than 50,000 square feet remain in demand and may be increasingly hard to find in the downtown core.

“It’s a market favourable to tenants, generally speaking, but if a tenant is looking for 200,000 square feet, then you have less options,” he says. “What we’re seeing is that slowly but surely there’s a small reduction of the number of large blocks of space.

“As space gets leased, the attraction and the interest in putting up a new building become more interesting.”

Contenders to build in Montreal

Laurin cites several projects in the planning and pre-leasing stages that could get underway this year.

Top of the list would have to be the vacant 135,000-square-foot site on Robert Bourassa Blvd. south of Place Victoria that has just been obtained by Broccolini for $100 million. The site, claimed to be the largest space available for redevelopment downtown, was owned by Magil Laurentienne and Desjardins Group. Broccolini is planning a mixed office, residential and commercial project at the site.

* Westcliff Group hopes to go ahead with a 900,000-square-foot development at Place de la Cité Internationale near the ICAO building;
* Cadillac Fairview’s 750 Peel, part of the Quad Windsor project;
* and a joint Canderel–Fonds immobilier de solidarité FTQ venture on the block bounded by Jeanne-Mance, de Bleury and Ste-Catherine Streets that would include two towers providing 380,000 square feet and 820,000 square feet of office space, respectively.

In addition, more than 750,000 square feet of new office space is under construction downtown.

That number includes an 180,000-square-foot extension to the Sommer Building (416 de Maisonneuve Blvd. West) by Rester Management that has been pre-leased to financial institution Desjardins and the conversion by Kevric of the seven-storey 1100 Atwater from a data centre into an office building, which will translate into about 180,000 square feet.

Laurin says the mood in Montreal remains very positive despite last November’s election of left-leaning Valérie Plante as mayor and the defeat of former mayor Denis Coderre, who was supported by the business community.

“I think that there’s a fair amount of momentum (and) a desire to invest, which has a direct impact on the demand for real estate.”

He notes land values “have been heating up” and there is very little land available north of René Lévesque Blvd. Meanwhile, most sites on René Lévesque itself that could have been developed into office spaces have been swallowed up by condo developments. As a result, the natural pressure for redevelopment of office buildings will most likely be south of René Lévesque.

Laurin says the likelihood is that the availability rate in Montreal will come down this year if growth continues. “Montreal is well-positioned to continue to see growth across all sectors in real estate.”

But he attaches the caveat tenants are being more efficient in how they design space, with fewer private offices and more open spaces. The result is tenants are often satisfying the needs of more people with the same amount of space.

Meanwhile, the overall availability rate for industrial space in the greater Montreal area continues to track at a relatively low rate and was at 6.1 per cent at the end of the third quarter of 2017, according to NFK Devencore’s year-end industrial market report. Estimated net asking rents have remained unchanged over the past 12 months, and currently average $5.91 per square foot.

The report notes only one major multi-tenant project is currently under construction, a 216,000-square-foot building in Saint-Laurent that combines office and warehousing space.

Although no major speculative developments are underway, Molson Coors recently announced a move into a new $600-million facility in Longueuil near St. Hubert Airport; Ikea is constructing a one million-square-foot distribution centre in Beauharnois; and Costco is investing more than $100 million in a 550,000-square-foot distribution centre in Varennes.

There is a broad selection of industrial inventory for tenants seeking spaces with contiguous footprints of 10,000 square feet or less, but much of the inventory is somewhat dated in terms of current height and energy-efficiency standards, the report notes.