Downtown Toronto’s office building boom shows no signs of slowing down, which is a good thing for companies looking for lots of space and having difficulty finding it. 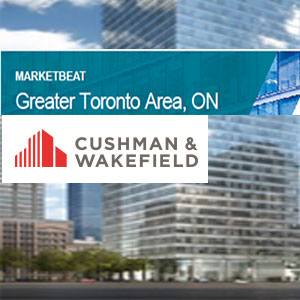 “Downtown Toronto has seen remarkable growth over the past few years, and has performed well since the financial crisis,” said Cushman & Wakefield national director of research Stuart Barron. “A key reason is that many tenants who have traditionally been located in the midtown or suburban markets are choosing to relocate into the downtown market.

“Another key reason is that a growing swath of technology companies now make their home in downtown Toronto. This embraces e-commerce, big data, marketing analytics, software development and so on, and this sector is red hot with growth. While these creative companies love the brick and beam space, so does their real estate footprint, and they are eating up space at a record pace.”

According to 2016 fourth quarter results released by Cushman & Wakefield, available space in downtown Toronto has plunged to an eight-year low of four per cent in spite of the flood of new space that’s completely altered the city’s skyline. The last time availability hit such a low level was in 2009 when the development cycle that started in 2006 kicked into high gear.

Approximately 2.1 million square feet of space was absorbed in the past two years by expanding, relocating and new companies. To put that figure in context and show how much demand has accelerated, the quarterly average absorption for Toronto over the most recent five-year period was 157,000 square feet.

“In some cases, landlords who have the ability to relocate tenants to alternative space within their portfolio may be able to strategically create larger blocks of space,” said Barron. “Some tenants may not have options, and this will mean paying higher than anticipated rental rates to existing landlords if they have no viable alternatives.”

Despite another 5.8 million square feet of office developments that are either under construction or soon to begin rising in downtown Toronto, Barron expects that the market will remain very tight until 2020.

“The market is so tight that smaller developments in the pipeline will do little other than provide short-term relief in what has become a very hot market,” he said.

“The most significant new tower of size would be Ivanhoé Cambridge’s 81 Bay Street.  The first of two such towers that will form an iconic complex in the downtown south market will bring 1.5 million square feet to the downtown market in 2020. It has both location and size, which will create opportunities for tenants who wish to consolidate into a preferred location right next to Union Station. Prior to that time, tenants who are after big space may find themselves very short of options.”

More high-rise office and residential building announcements are expected this year in an effort to keep up with the demand.

“There continues to be significant opportunities for development in the downtown Toronto market,” said Barron. “This will not change over the medium term.”

Barron said that while “the odd tenant” has relocated from downtown Toronto to the suburbs to find more available space and lower lease rates, it’s still more common for companies to go in the opposite direction. New opportunities could arise for suburban landlords, however, if this current and long-lasting trend continues as expected.

“Companies that want the brightest and the best leaders of tomorrow are more concerned about key talent in order to grow their top line rather than cutting costs to reduce the bottom line,” said Barron.