Dream Office REIT (D-UN-T) has put 700 de la Gauchetière, a 28-storey office building in downtown Montreal, on the market in a sale which should fetch the trust more than $300 million, Colliers International predicts. 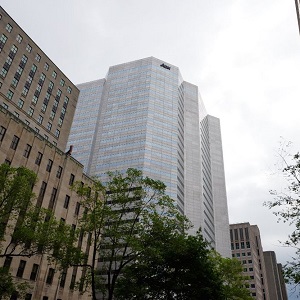 Built in 1983, the class-A building off Victoria Square in the Quartier International neighbourhood has a gross leasable area of 935,209 square feet and is directly connected to the Square-Victoria Métro station.

“The current market conditions are very favourable (in Montreal),” says Andrew Maravita, managing director, Quebec for Colliers International, which has the leasing mandate for 700 de la Gauchetière but is not the selling broker.

Cap rates for class-A office buildings “are extremely tight and are at similar levels than the Toronto market currently,” he says. “An A-class building in the downtown core is a very sought-after asset for large institutional investors or foreign investors.”

The selling price for 700 de la Gauchetière, which has been put up for sale on a confidential basis, “is going to be within very aggressive cap rates,” Maravita says. “(It’s) in good condition and has gone through, and is currently going through, various major cap-ex investments.

“It’s not situated on a land lease, compared with other office buildings in the downtown core. It’s connected to the underground, so there’s various pluses connected with this building. It has a lot of advantages. ”

Given current market conditions, he expects a sale to close by year-end.

Maravita says Dream Office REIT has been disposing of key assets in several Canadian markets and 700 de la Gauchetière is its sole property in Montreal.

Dream Office REIT management did not immediately respond to a request for comment about the building sale.

The REIT has been focusing on the Toronto market in recent years, and has sold $3.3 billion of assets since 2016.

In a May investor presentation, Dream Office REIT noted it owns eight million square feet of high-quality assets, located mainly in downtown Toronto (57.4 per cent of its total portfolio) and the GTA. “We do Toronto office,” the presentation noted.

Maravita says 700 de la Gauchetière is about 95 per cent occupied, which is well below the current Montreal downtown core vacancy rate. “There’s very good leasing momentum going on,” he says, noting 17,000 square feet in the building was recently leased.

For the remaining space, “we believe that the asset is well-positioned to capitalize on a growing economy, record low unemployment rate and strengthening technology sector in Montreal’s downtown office market,” the REIT noted in the report.

Meanwhile, Maravita notes he has been thrown into an unexpected office leasing move – his own.

On July 13, a five-alarm fire on the roof of the 30-storey Tour Bell Media at 1800 McGill College Ave., where Colliers has its Montreal offices, injured two roofers and caused substantial damage to the roof and building systems. The office building, owned by Redbourne Group, will be closed for an estimated two to four months, he says.

“Right now, we are in kind of emergency mode and temporary relocation mode,” says Maravita, adding Colliers plans to leverage its partnership with Regus office centres to relocate 70 staffers.

“We’re built to handle these types of emergencies because it’s our core business. You usually do it for clients. Now we’re actually putting it into place for us and have various clients in that office tower that we are supporting as well.”

The biggest concern is for businesses to continue to operate and get online as soon as possible so that there is not a long interruption, he says.

“It’s very hectic and you need to plan things out and put together a command centre quickly and find alternative space. It certainly has its challenges and pressures.”