While Dream Office REIT (D.UN-T) has put nine buildings up for sale in Regina and Saskatoon, its parent company is moving forward with several major residential and mixed-use developments in both Saskatchewan cities. 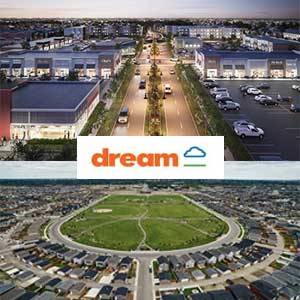 “In Saskatchewan, we have roots that go back about 60 years,” said Dream Unlimited Corp. (DRM-T) senior vice-president of land and housing Dan Marinovic.

“We’re very big believers in the province and its cities and are very much there for the long term.”

Brighton will accommodate a projected 6,400 residential units that will house 15,000 people at full build-out.

A 5,000-square-foot community information centre built on the site is equipped with virtual reality technology that provides prospective homebuyers the opportunity to experience living in the neighbourhood before making a decision to purchase.

It also hosts a variety of community events, including cooking, yoga and dancing classes.

Home construction on Dream’s first two phases of development in Brighton, totalling 470 lots for single-family homes and townhouses, is underway. There have been more than 130 housing starts and more than 70 home sales.

The next planned phase release is scheduled for the spring of 2018 and will include 291 lots for single and semi-detached houses as well as townhomes.

Dream will break ground this year on the Brighton Marketplace shopping centre, a 240,000-square-foot retail development located at the intersection of McOrmond Drive and College Drive.

“Dream also continues to advance its planning approvals for the Brighton Village Centre, a 500,000-square-foot mixed-use development that will incorporate office, retail, civic and residential uses at the primary gateway to the community,” said Marinovic.

“The development concept was designed with the assistance of Bruce Kuwabara from KPMB, a Canadian architect internationally recognized for his commitment to city-building, vibrant public spaces and architectural excellence.”

Dream intends to begin construction on its first office building by the end of this year.

Dream is nearing completion of its 141 acres in South Kensington, located in the west quadrant of Saskatoon. The overall Kensington community is being jointly developed by Dream and the City of Saskatoon’s land development branch.

It will accommodate 8,300 residents in 3,400 homes on 473 acres at full build-out. Dream is developing 30 per cent of the residential yield and approximately 90 per cent of the available retail area.

Construction is underway on the 6.5-acre site of Shops of South Kensington, the first Dream Centres shopping centre in Saskatchewan, which will accommodate 75,000 square feet of retail space. It will include Saskatoon’s first Save-On-Foods as well as Shoppers Drug Mart and Scotiabank.

“Meanwhile, Homes by Dream recently began construction on its new semi-detached product lineup in Kensington, and we continue to have substantial success leasing rental units in our apartment building,” said Marinovic.

Eastbrook, a 179-acre community in the southeast part of Regina, is expected to produce approximately 2,000 residential units for an estimated 5,000 residents along with a projected 100,000 square feet of retail space.

Site servicing is nearing completion on the first phase of development, which consists of 271 lots for single-family, semi-detached and townhouse dwellings. Home construction is slated to commence this spring, while the official community launch is scheduled for September.

The launch of the second phase of development is anticipated for next year. Those lands will accommodate a variety of residential densities and mixed-use development.

Coopertown is a master-planned community

Coopertown is a 1,900-acre master-planned community in Regina’s northwest sector, where Dream owns 1,050 acres. It will be home to more than 35,000 people in approximately 14,000 residential units upon completion. It will also have approximately 500,000 square feet of retail, office and civic space.

City council is expected to hear the neighbourhood plan in the second quarter of this year, and a hearing of the Elmbridge concept plan is anticipated prior to the end of 2017. Dream expects to begin site-servicing work in Elmbridge in the spring of 2018.

“We may see some housing starts later that year, but first housing occupancies are anticipated in 2019,” said Marinovic.

Harbour Landing is a 789-acre development by Dream that’s nearing completion in Regina, which is expected to grow to 300,000 residents over the next 25 years.

The community is expected to house 15,000 people and approximately 1.5 million square feet of office, retail and industrial space at build-out.

“Only a handful of lots remain available for sale until Dream is completely sold out of inventory,” said Marinovic.

Dream is targeting construction commencement of its commercial campus on Parliament Avenue this spring. The development will feature approximately 85,000 square feet of showroom industrial and flex commercial space.

There are also plans for a future shopping centre.