Canadian ecommerce giant Shopify is expanding again, this time adding more than 46,000 square feet to its leasing commitment at the King Portland Centre currently under development in Toronto. 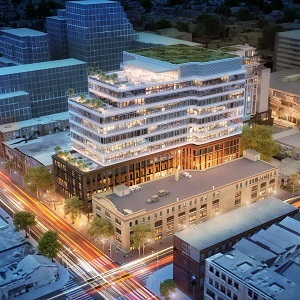 An artist’s conception of the King Portland Centre now under development in Toronto. Shopify will lease over 158,000 square feet of office space in the property.

In a release Thursday, King Portland co-owners Allied Properties REIT (AP.UN-T) and RioCan REIT (REI.UN-T) announced the Ottawa-based tech firm will expand its previously announced lease by 46,234 square feet to a total of 158,520 square feet at the centre.

The expansion brings the office component of King Portland to 93 per cent leased, the companies said.

This is the second major Canadian expansion announcement for Shopify in recent months. The company has also leased approximately 325,000 square feet of office space in Ottawa at 234 Laurier Ave.

The 26-storey tower is the former headquarters of the crown corporation Export Development Corp.

The King Portland Centre is located at 602-620 and 642 King Street West in Toronto. The 61,608-square-foot property is bordered by Portland Street and Adelaide Street West and includes three other structures. Two of the existing structures are heritage buildings, one of which has already been restored.

The King Portland Centre is a new high-rise being developed on the site. It will contain 256,173 square feet of office space, 13,035 square feet of retail and approximately 116 residential units.

The office and retail components of the King Portland Centre are designed to a LEED core and shell Platinum standard and “will include best-in-class operational, environmental, life-safety and health and wellness systems,” the release states.

It will be integrated with two other buildings on the site, a rental property at 642 King Street West and a second heritage building currently undergoing restoration.

Allied and RioCan are 50-50 partners in three of the structures (excluding the already restored heritage property). When the King Portland Centre is completed in early 2019, Allied will manage the office component and RioCan the retail and residential components.

Shopify was founded in 2006, and has grown at a breakneck pace during the past decade, with 400,000 active stores using its platform and $34 billion in sales.

Its expansion in Ottawa is expected to enable the company to more than double its approximately 750 employees in the nation’s capital. Shopify currently has five North American offices and more than 2,000 employees.

Once the move to Laurier Avenue is complete, Shopify plans to occupy more than 70 per cent of the 451,541-square-foot, class-A building, which is managed by Slate Asset Management. Employees are to start moving in sometime during 2018 once a major retrofit is completed to bring the building up to current standards.

Shopify’s global headquarters is currently located in a 170,000-square-foot building at the nearby 170 Elgin St. The company moved into that site just three years ago.

Allied is one of Canada’s leading owners, managers and developers of urban office environments. Its portfolio includes properties in nine major cities across Canada and comprises about 11.5 million square feet of office and retail. It also has about 630,000 square feet of properties under development.

RioCan is Canada’s largest REIT, with an enterprise value of approximately $14.6 billion. It owns and manages Canada’s largest portfolio of shopping centres, with ownership interests in 300 retail and mixed-use properties comprising a net leasable area of about 46 million square feet.

RioCan also has 15 properties under development.