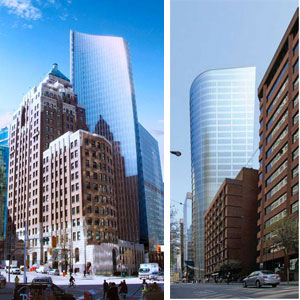 At the mid-point of last summer, amid a two-million-square-foot office tower building boom, Vancouver’s downtown office vacancy had climbed to nearly 10 per cent. That was the highest level of office vacancy for the downtown core since 2004.

Meanwhile, Metro Vancouver’s overall office vacancy rate had climbed to 10.3 per cent, the highest level in a decade. At the time, realtors were predicting the downtown vacancy rate could rise to 12 per cent or even higher by the end of 2015 as the record amount of new office spaces began to open.

On Wednesday, commercial real estate experts gathered at the city’s waterfront conference centre for a panel discussion that initially aimed to assess strategies to cope with the expected record-high vacancy rates.

However, the panel, comprised of a combination of brokers, investors and landlords, took up a more optimistic tone.

Taylor said Vancouver has a more diverse economy than many realize and it appears to be weathering the storm of global economic uncertainty, as well as the surge in new downtown office space.

“I think in Vancouver we all live in this little myopic world to think that we can’t sustain that much growth,” he told RENX on the sidelines of the talk.

He said the additional two million square feet of downtown office space that emerged in 2015 represents roughly 10 per cent of the area’s total.

“It was substantial,” he said. “We just didn’t see demand there, but then you had companies like Microsoft who expanded.”

Taylor said Vancouver’s economy has been maturing. “When I came here in 1989. the whole market was (based) around rocks, fish and trees.”

But service, tourism and technology have helped buttress Vancouver against the currently weak commodities markets, he said. “We are a much more diversified economy now.”

The story in the suburbs isn’t as rosy, however, as the overall vacancy rate for Metro Vancouver — including Surrey, Richmond and Burnaby — is at 11.6 per cent, Taylor said.

In the downtown, there was much pent-up demand for new office product prior to the 2015 boom, said Jocelyne Legal, vice-president of leasing for Triovest Realty Advisors. In the suburbs, “that demand is not there,” she said.

Office tower projects in the works

Several new large office tower projects in Vancouver’s downtown are in various stages of planning, such as 1090 W. Pender by Bentall Kennedy (right in image); 1133 Melville by Oxford Properties; and 555 W. Cordova by Cadillac Fairview (left in image).

“There has to be an Alberta-like event to put a halt on the projects that are planned,” said Jeff Lim, vice-president, leasing, Bentall Kennedy, Canada, referring to the decline of oil and gas prices.

“I think all those (downtown Vancouver) projects are forging ahead, unless something unexpected happens to cause vacancy to rise to 18-20 per cent.”

Lim agreed Vancouver has cultivated a more diverse economy with strong fundamentals. “Vancouver has multiple demand drivers,” he said. “This is as busy as I’ve ever been. It can only be a positive.”

He noted there is still substantial amount of vacant space in the downtown core, but prospective tenants are continuing to take tours. “Every vacancy is getting looks and that’s encouraging.”

CBRE conducted an internal survey recently that indicated 49 per cent of new companies looking for space in Vancouver are in the technology industry, Taylor said.

While tech firms appear to be the biggest driver of leases from CBRE’s perspective, some of B.C.’s traditional economic leaders could rebound, he added.

“If the U.S. housing market does catch steam, you’ll see the lumber market come back in Vancouver,” he said. “All of a sudden some of the traditional businesses are going to start coming back — commodity-based industries are going to come back, and when they do, Vancouver has another engine running that right now is just idle, sitting there quiet.”