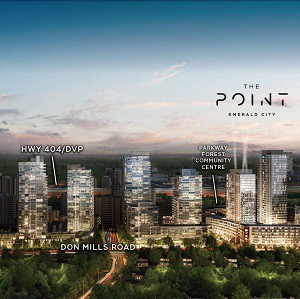 The 279-unit Point tower illustrates the changing demands of Toronto buyers: bachelor units that were previously part of the mix in Emerald City buildings are no longer present. Instead, buyers are being offered a mix of one- to three-room condos, geared to single professionals, families and empty nesters.

“The mix is evolving from building to building based on market demand,” said Dror Duchovny, director of marketing and business development with Elad. “This is to meet the demand for empty nesters and expanding families.

“We see it as an alternative to a townhome or a bungalow. Families that are looking for those types of housing solutions, this is another way to answer that need at a cheaper price point.

“I don’t think you can buy ground-related properties in Toronto for less than $1 million and you can at our project for substantially below that.”

Prices for suites in The Point tower will start in the $300,000-range ($700 per square foot), with a higher mix of three-bedroom condos than previous towers.

Beside pricing, location is another trump card for the latest Emerald City addition. The expanding condo project is located adjacent to Highway 401 and Don Valley/404 and adjacent to CF Fairview Mall.

The Point is part of the final third of the Emerald City development.

First was Block A, which today is comprised of three completed and occupied residences. Block B is made up of three towers under construction and Block C includes The Peak. One more building, a smaller 13-storey building complete with a podium, is in the planning stages.

Galleria Shopping Centre up next

Next up on Elad’s development path is the Galleria Shopping Centre. The developer and a partner purchased the west end Toronto mall and are in the rezoning process to create a master-planned community on a similar scale to Emerald City.

Duchovny noted the neighbourhood is undergoing a transformation from its gritty working-class character. Elad’s new development will be a part of the change and is in keeping with the trend toward intensification.

“The city is moving to a more dense environment so from the city’s perspective, it should be a more dense site.”

Established in 1997, Elad Canada sought to expand in Central Canada through the acquisition of income-producing properties in various asset classifications as well as development sites. It had created a portfolio of approximately 5.9 million square feet of commercial space and approximately 17,000 apartment and seniors’ units by 2008.

In recent years, the company has shifted its focus from income-producing properties to development sites, specializing in mid- and high-rise condominium development and master-planned communities.

In addition to the Emerald City master-planned community in Toronto, Elad is behind the Cité Nature condominium development next to the Olympic Village pyramids and the redevelopment of the historic Nordelec building in Montreal.

It is part of the Elad Group, a real estate conglomerate with development projects across three continents. Elad Group has developed successful condominiums, hotels and mixed-use projects making its mark as a significant developer of ultra-luxury properties in New York City.

The parent company is focused “on the acquisition, development and conversion of architecturally significant residential and commercial properties in key markets throughout North America.”