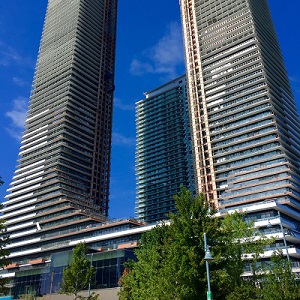 The excavation on the nearly three-acre site at Humber Bay was equivalent to the size of 90 Olympic-sized swimming pools, according to Empire high-rise president Emilio Tesolin. He also noted the 80,000 cubic metres of concrete poured so far would stretch around the earth if it was contained in three-inch cubes.

Eau Du Soleil was designed by Richmond Architects Ltd. and Zeidler Partnership Architects. Construction started in March 2015. A phased occupancy is slated to begin in February for the 195 units in the podium, which connects the 50-storey Water tower with the 67-storey Sky tower at 2183 Lake Shore Blvd. W.

All of the suites, with interiors designed by Studio Munge and Flora Di Menna Designs, should be ready for move-in by February 2020.

More than 350 people are working on Eau Du Soleil every day, and RENX was recently invited to the 60th floor of Sky to see the progress and stunning views it will offer.

Prices were in the $700-per-square foot range when sales began in 2012. Now, with 1,269 of the 1,280 units in Eau Du Soleil sold, they’re more than $1,000 per square foot — making the condos the most expensive on Humber Bay, according to Empire executive vice-president of sales Dan Flomen.

Eau Du Soleil’s unit sizes start at 400 square feet and extend to 2,000 square feet. There are a variety of bedroom configurations, ranging from one-bedroom-plus-den to three-bedroom units.

“There are some large terrace units and two penthouses, and that’s it,” said Empire marketing vice-president Sue MacKay. “We’re pretty much sold out and the buyers for that handful of units will be end users who will be looking for the gems of the building.”

One “super penthouse,” which hasn’t yet been marketed, will be 3,500 square feet and priced around $4 million, according to Flomen.

Eau Du Soleil will feature more than 40,000 square feet of indoor and outdoor amenity spaces, including a fitness centre, a 24-hour concierge, an indoor saltwater pool and hot tub, a terrace with outdoor barbecues, a party room and a theatre room.

“A major drawing feature is the green space, trail and proximity to the lake,” said MacKay. “We’re really fortunate in our location, to have the trail right across the street and Humber Shores right across the street, and having that peace of mind that it’s never going to be built on and you’ll have these views forever.”

There will be 1,323 parking spaces for owners and 226 for visitors. Electric vehicle charging stations will be included.

There will be 55,000 square feet of commercial and retail space in Eau Du Soleil. Although no names have been disclosed, two restaurants, two real estate offices and a convenience store have been confirmed as tenants.

Eau Du Soleil is on the Lakeshore streetcar line, there’s a nearby direct bus route to the Bloor-Danforth subway line, and the Mimico GO train station isn’t far away. It’s a short drive from the Gardiner Expressway, Queen Elizabeth Way and Highway 427.

Vaughan-based Empire has built more than 12,000 new homes and high-rise condo units across Southwestern Ontario and the Greater Toronto Area since 1993. More than 20,000 new planned homes and units are on the way, including four other high-rise projects:

* Empire Phoenix will stand 29 and 11 storeys tall, anchored by ground level two-storey suites, near the Humber River and between the Gardiner Expressway and Lake Shore Blvd. W. in Etobicoke;

* Empire Maverick will be 49 storeys tall and feature suites ranging in size from one to three bedrooms at 333 King St. W. in Toronto. It will be anchored by street-level retail;

* A limited number of the 219 suites remain available at Empire Midtown, which features two-storey townhomes and two-storey condo units, near the intersection of Eglinton and Oakwood Avenues in Toronto;

* Empire Rain & Senses is a 532-suite condo community in the Kerr Village neighbourhood in Oakville. Rain is complete and occupancy preparation for Senses is underway.