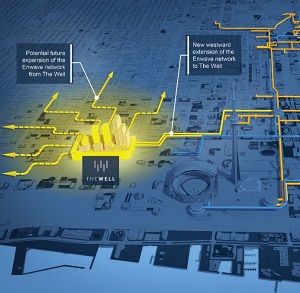 Enwave is partnering with Allied and RioCan to bring its thermal energy cooling and heating systems to their new development The Well. (Image courtesy Enwave, Allied, RioCan)

“We have a number of unique types of deals with this thermal battery concept, but this is first one we’ve done in Toronto,” said Enwave East Region president and chief operating officer Carlyle Coutinho.

How the Enwave system works

Two six-million-litre storage tanks will be constructed underneath The Well, which is being developed by Allied and RioCan. The tanks will store temperature-controlled water fed by Enwave’s existing Deep Lake Water Cooling system (see Enwave grows into thermal energy powerhouse) and a new high-efficiency hot water network.

The system will store thermal energy that can be distributed and stored during off-peak times and overnight so it can be deployed when needed.

This collaboration on the westward extension of Enwave’s existing Deep Lake Water Cooling and hot water distribution networks is the first of its kind in Canada. It will increase the existing system’s capacity, with the ability to serve more than 20 million square feet of commercial, retail and residential space in downtown Toronto.

While much of the new capacity will serve The Well’s residents and commercial and retail tenants, it will also enable The Well to act as an anchor site for future neighbourhood growth.

“It pre-heats the water as it goes out to the retail consumers in the district. It’s a really unique solution involving recycling energy. It’s sustainable and decouples from the electricity market. It’s a great solution for our grid problems. We take over 60 megawatts from the grid, which is really fantastic for the whole city.”

While Coutinho said it took more than a year for Enwave, Allied and RioCan to work through everything to make their plan come together, he added that the City of Toronto was very supportive during the process.

Details of the cost of the project and how it will be paid for aren’t being disclosed.

“We’ve come up with an agreement with everyone that we feel will provide a lot of benefits for everybody,” said RioCan senior vice-president of developments Andrew Duncan.

The Well will stretch down the western side of Spadina Avenue from Wellington Street to Front Street. It will feature 1.1 million square feet of office space, 500,000 square feet of retail and food service space, and 1,800 residential units. Construction commenced last year, and installing the Enwave system won’t affect the development’s 2021 target completion date.

“The way we’ve designed it is such that there will be minimal impact on our project as a whole,” said Allied vice-president of development Hugh Clark. “We’re progressing according to our established schedules.”

Enwave’s system supports office and condominium towers, hospitals and data centres in downtown Toronto. It signed up Toronto General Hospital and other new buildings last year and will commission them this year.

The company’s goal is to continue to expand westward from The Well and eastward to all of the new development activity taking place in the East Bayfront area. Enwave’s heating system currently goes as far east as St. Michael’s Hospital at 30 Bond St. while its cooling system extends to RBC WaterPark Place at 88 Queens Quay W.

“We’re looking to continue to be a partner with developers and the city and whoever requires a partnership and has lofty goals for low carbon thermal energy networks. We look at energy holistically and we’re partnering up with some very progressive thinking developers and organizations to provide solutions in an environment where we have lofty goals from the Ontario government and the City of Toronto.

“We want to meet those goals.”