When the Fairmont The Queen Elizabeth was recently renovated in its entirety, owner Ivanhoé Cambridge decided to do away with the existing penthouse suites on the top floor of the downtown Montreal hotel. 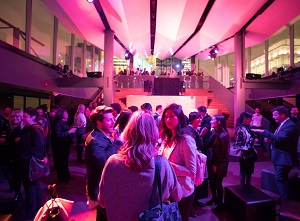 The idea for the top floor was “if we’re going to do something that changes the perspective of the hotel, we’re going to need to use the best floor,” says Jean Pelland, principal associate at Sid Lee Architecture, part of the architectural consortium which helped Fairmont reposition the hotel.

“We wanted to change the paradigm of just putting suites on top (and) giving away that very precious floor to individuals.”

Enter Espace C2, a business meetings facility on the 21st floor created in partnership with C2 Montreal, the organization that has helped reinvent the business conference with its annual meeting in Montreal which highlights commerce and creativity.

Espace C2 is a 7,000-square-foot facility which can host up to 220 for a wide manner of events. It was built at a cost of $11 million, part of an overall $140 million renovation of the 60-year-old hotel. The 950-room Queen E reopened last summer after being closed for more than a year.

Espace C2 can host the “experiential experiences that C2 specializes in,” says Julia Cyboran, vice-president of marketing and communications at C2 Montreal.

At its centrepiece is a modular space for hosting conferences, meetings and other events, as well as smaller, modular meeting rooms. Bleacher seating can be retracted and converted into an experiential brainstorming lab, the Pool – consisting of large pools of balls people can sit in (reminiscent of Ikea playgrounds for kids).

Gridlines installed on the ceiling can be used by acrobats or for modern audio-visual equipment. And in the summer a rooftop terrace which provide guests a view of the downtown core is accessible for open-air events.

In June, Espace C2 took top award in the event spaces category at AHEAD (Awards for Hospitality, Experience and Design) Americas 2018 for hotel owners, developers, operators, architects and designers. Judges commented Espace C2 is “a fantastic adaptation to a historic building that creates a transformative experience.”

Cyboran says C2 Montreal has worked with corporations, non-profits, politicians and others who use the space to solve business problems, host team building and leadership events, or for brainstorming sessions. The goal is to “(have) your mind blown away by experiences that you wouldn’t have ever lived before.”

“Business convening can change and evolve”

Founded in 2012 by Jean-Francois Bouchard, a founder of creative agency Sid Lee, and Cirque du Soleil president and CEO Daniel Lamarre, “C2 in its very young life has been able to demonstrate that business convening can change and evolve,” she says. “It doesn’t have to be about a bunch of people sitting in a room listening to a talk.”

Organizations can choose whether they wish to hire C2 Montreal to organize events at Espace C2. Food and drinks at events are provided by the hotel, which also has business facilities on the second and third floors.

The site has had several bookings weekly since it opened and was recently named one of the most Instagrammable spots in Montreal by the daily La Presse newspaper, she says.

Part of the Espace C2 vision was to re-engage with Montrealers and change the way people perceive hotels, Pelland says.

“It was a pretty complicated endeavour because you’re basically planting a conference hall on top of a hotel that was previously dedicated to only rooms. We had to strip the whole space.”

The former eight-foot ceilings were raised, the shell was exposed and a slanted glass structure built over the existing roof.

Aside from the rooftop terrace there is a small rooftop vegetable garden and a few bee hives. (A number of Fairmont hotels have rooftop gardens, including herb gardens at the Royal York in Toronto and Château Frontenac in Quebec City.)

Goal was to bring Montrealers back

Pelland says one goal of the hotel repositioning was to bring back the buzz it had with Montrealers when it first opened. A new restaurant, urban market and bar elsewhere in the hotel are doing well, he says, “but there’s always the challenges of understanding the product you have and delivering the experience that brings people back.”

Queen Elizabeth Hotel owner Ivanhoé Cambridge previously hired Sid Lee Architecture to reposition the public spaces at its Rockhill Apartments in Montreal, but “we’d never done a hotel prior to this. They gave us a blank canvas.”

Since working on the Queen E, Sid Lee has been hired by, among others, the W Montreal hotel to redo its amenities and W Toronto to redo the entire hotel.

Meanwhile, it appears the Espace C2 concept is exportable – another C2 space recently opened at the Melbourne convention centre in Australia.

“There definitely is a need to reinvent the business of convening and how meetings happen,” says Cyboran of Espace C2. “This is just the first dip in the water.”