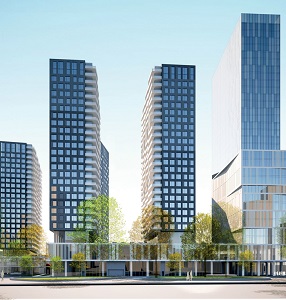 The developer says it has sold more than 95 per cent of the 307 condos in EstWest‘s Est tower on the site of the former Montreal Children’s Hospital in downtown Montreal. As a result, it will move up sales of the second phase, the 320-unit West tower.

There has been a huge public appetite for the condo project, says Marco Fontaine, director of sales and marketing at Devimco.

Before the project’s official launch, “we created a website and many people registered to buy a condo or rent an apartment. In the first weeks after launching the project, we collected more than 2,000 names.” By the time the project launched, another 2,000 or so names had been collected.

“We had a lineup and people who slept outside before the launch.”

The $400-million Square Children’s site will eventually include about 1,400 residential units, including rentals and social housing. Devimco is partnering with the Fonds de solidarité FTQ – the investment fund of the FTQ trade union – and private investment firm Fiera Capital Corporation to complete the project.

It became available for construction when the Montreal Children’s Hospital moved westward a few years ago to the new Glen site of the McGill University Health Centre, which also includes the Royal Victoria Hospital, Montreal Chest Institute and Shriners Hospital for Children.

In June, after conducting public hearings on the project, the City of Montreal gave its go-ahead despite criticisms proposed towers were too tall and there were not enough units devoted to families. However, the city predicted many families would be willing to accept small two- to three-bedroom residences of 700 to 1,000 square feet for the convenience of living downtown.

The Children’s Hospital, which had been at the site for more than a century, is being demolished. Only a nurses’ residence built in 1919 is being restored and integrated into the project.

Demolition should wrap up at the end of March and construction of the Est condominium tower should begin by the beginning of 2019. Delivery is slated for spring 2020.

Sales for the West tower will launch in early 2018 “and again we have lots of interest.”

The project has attracted buyers mainly living within a one-kilometre radius. “Westmount clients responded very well,” particularly empty nesters who want to sell their homes and live in a condo environment,” Fontaine says.

Fontaine says there is a linguistic mix of about 55-45 per cent anglophones and francophones, many young professionals and Asians. (Nearby Ste. Catherine Street between Atwater Avenue and Guy Street has become a mini-Chinatown.)

The project is not allowing Airbnb; it forbids daily rentals and requires minimum rentals of 30 days.

The two condo towers will be connected by a two-storey base area known as a “basilaire” that will contain an 11,000-square-foot training centre, indoor pool and games room. A Sky Lounge on the top floor of one of the towers will provide views of the city and Mount Royal. There will be a work lobby with USB outlets where self-employed residents can work.

Prices for the West tower will be slightly higher than for the Est, given the time difference in construction and rate of inflation. Units will range in size from 270 to 1,833 square feet. Studios start at $200,000 taxes included, while units with two bedrooms sell for around $450,000.

Two rental apartment towers will be built behind the EstWest condos, although the size of those buildings has not been finalized.

Aside from the condos, rental apartments and social housing, the project will include a community centre and enlargement of an existing park called Henri-Dunant Park. It could eventually include a school, an office building or hotel but these parts of the development have not been finalized.

Fontaine says the project will require seven or eight years to complete and will include social housing units managed by the city’s municipal housing office.

Devimco is the developer behind Solar Uniquartier (see Devimco to kick off Montreal’s huge Solar Uniquartier), a $1.3-billion mixed residential-commercial-business project on the South Shore of Montreal as well as the District Griffin condos in the Griffintown neighbourhood of Montreal.  It also developed the lifestyle complex Quartier DIX30 (see Mixed-use addition for Montreal’s Quartier DIX30) on the South Shore.

Given the database of names Devimco has collected, Fontaine is confident the West condo tower will have similar sales interest as did the Est.

“New inventory downtown is lower than it has been in recent years and we see (EstWest) as a landmark project, a project that’s very popular.”