The orange cones that have been bedeviling Montreal motorists appear to be paying off. Montreal’s real estate community is decidedly buoyant about the high number of construction projects in the city. 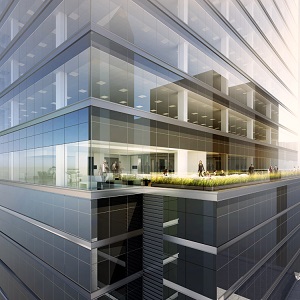 The Maison Manuvie, a 27-storey development being constructed by Ivanhoe Cambridge in Montreal.

“This is an exciting time to be a Montrealer,”Montoni Group director of business development Mike Jager said at the recent Montreal Real Estate Forum. “For the last 40 years, we saw the rest of Canada grow while we stood still.”

But for the first time in decades, people are moving back to the city, he says.

Jager should know: He moved back to Montreal after a stint in Toronto. “I missed the city. Success without happiness had no meaning.”

Bernard Poliquin, senior vice-president, office-Quebec at Ivanhoe Cambridge, notes there are a number of developments underway in the city that are worth billions of dollars. “We’re living through something in Montreal that hasn’t been seen since the 1960s,” he says.

Here’s a look at some of the developments on the island of Montreal that have the real estate community so optimistic:

* Champlain Bridge – The new bridge connecting the island of Montreal to the South Shore is expected to cost $4.23 billion and is slated for completion by December 2018.  More than 50 million vehicles use the existing bridge annually, making it one of North America’s busiest. The bridge will include three lanes of traffic in each direction, a cycling and pedestrian path and will house a new electric train to the South Shore;

* Pierre Elliott Trudeau International Airport – An additional $1.07 billion in investments is planned for the airport between 2017 and 2021, adding to the $1 billion invested since 2012. Renovations will include new airport parking terminals and a recladding of the main terminal building, says Charles Gratton, vice-president, real estate and commercial services, Aeroports de Montreal.

With 16.6 million passengers in 2016, the Trudeau Airport saw a seven per cent increase over 2015. It should soon reach the symbolic 20-million passenger level – which would transform its designation from a medium-sized to a major airport, Gratton says. “Air Canada wants to make Montreal a small hub,” he says, which will boost traffic further.

City of Montreal concentrating on infrastructure

After decades of neglect and crumbling roads, water mains and potholes, the city is taking infrastructure seriously. It will try to complete repairs on an average of 676 kilometres of infrastructure each year for the next 10 years.

The construction plans are expected to cost an average $702 million per year, an increase of 89 per cent from  2016.

“In 10 years, you won’t recognize the infrastructure of Montreal,” says Alain Marcoux, managing director of the City of Montreal.

*Centre hospitalier de l’Universite de Montreal (CHUM) – The $3.1 billion new downtown hospital is set to open its doors by the end of the year. It will bring together the Hopital Notre-Dame, Hopital Saint-Luc and Hotel-Dieu in its downtown setting;

* Bonaventure Expressway – The elevated stretch of the expressway from the Lachine Canal to downtown is being transformed into an urban boulevard at a cost of $142 million by the City of Montreal.  Green spaces will fill in much of the area freed up by the demolition of the elevated highway. The new public spaces are being touted as a link between Griffintown, Old Montreal and downtown;

* Ste. Catherine St. – A four-year plan to revamp the iconic shopping street is scheduled to begin in 2018 and last until 2022. It will include heated sidewalks on a 2.2 km. stretch of the street.

A number of office towers and mixed use projects are underway or planned in the downtown area. Here’s a look at some of them:

* Devimco has announced plans for a $400-million project to build six highrise towers ranging from 20 to 32 storeys at the site of the former Montreal Children’s Hospital  in western downtown. The six-tower site would include a hotel, office buildings, park, library, community centre and social housing for the elderly;

* Construction is well underway on the 27-storey Maison Manuvie. Developed by Ivanhoe Cambridge at a cost of about $200 million, the building will have 486,500 sq. ft. of office space;

* Ivanhoe Cambridge is also renovating Fairmont The Queen Elizabeth horwl at a cost of $140 million. The common areas and about 500 guest rooms are scheduled to open in time for Montreal’s 375th-anniversary celebrations, while the rest will be renovated by the end of the year;