For the past three RealCapital conferences in Toronto, a major source of concern has been rising interest rates in the U.S.  That is a source of amusement for Slate Asset Management partner and co-founder Brady Welch. 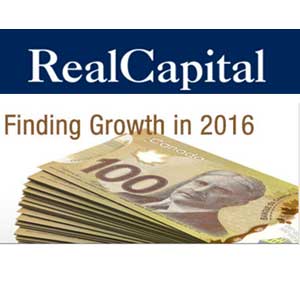 “Everyone has been calling about rates moving in the U.S.,” he said at the closing CEO panel. “Indeed, rates on 10-year U.S. Treasuries have actually fallen over the past few months.”

“So money is cheaper.  And, if you really step back – 10-year money in Canada at 1.2 per cent and 1.8 per cent – it is cheap money if you are buying hard assets with good cash flow and good covenant tenants. That is why real estate is a good place to be today.”

Brady marvelled at the current negative interest rate environment in Europe and predicted “core buyers are going to push cap rates lower,” particularly in Toronto and Vancouver and the gateway cities in the U.S. “It is a global phenomenon in other markets where there is a bigger shift between secondary markets and core assets.”

The trend is also negatively affecting Allied Properties REIT (AP.UN-T), said president/CEO Michael Emory. “I expect that in 2016 the environment for acquisitions for us is generally going to be unfavourable.”

“Cap rates are under downward pressure in the urban cores of the major cities and that is going to continue. They are at least going to stay where they are, which is inordinately low, and they may even go down further.”

He added a further bit of pessimism: “The REITs and the pension funds have retreated from the Canadian market and foreign players have taken the opportunity to come in because it is usually a pretty difficult market to penetrate.”

“I don’t see the REITs reactivating any time soon, either because they can’t or like us, because they don’t want to under the current pricing regime. And, the pension funds are currently trying to beef up their global allocation.”

Emory added he expects public real estate entities to be snapped up at some point this year or beyond because of the “disconnect” between equity real estate companies and direct real estate investment.

“My guess is it has created a huge buying opportunity which at some point is going to be exploited. . . . At some point people are going to make a lot of money buying some of the public equity players in Canada.”

David Arthur, managing partner of Brookfield Property Group (BPY.UN-T), cautioned bargain hunters in the public space are facing the complexity of buying portfolios that likely contain a mix of good and bad.

Robust equity markets from 2010 to 2012 allowed many property owners to take iffy portfolios public – “some of the asset quality probably could not have gone public unless it was a strong market with a lot of capital pushing it” – and those properties remain in the public markets.

He added foreign buyers can be selective in picking up properties in the private market, “but in the public markets you are buying a portfolio with all its good things and all its bad things, overheads, assets that you may not want. So I think that is causing a pause in the public markets now.”

President/CEO Rael Diamond noted CREIT (REF.UN-T) currently trades at a 10 to 15 per cent discount to its net asset value. Looking at it another way, that currently values its Alberta office holdings at about zero value, he added.

Brookfield’s Arthur noted the U.S. has 52 cities with a million-plus population to Canada’s six.  It has a far more diverse and robust economy and provides a “safe haven” status for foreign investors.

He pointed to the Houston office market, which has none of the oil market shake up that Calgary is currently going through.

“Houston office space as an example is much more diversified, hasn’t seen the same kind of sublease situations or rent drops as you have seen in Calgary.”

“Office leasing certainly across our portfolio has been relatively robust over the last 12 months. We have seen good leasing momentum, we have seen rent rollover upticks in rate.”

“We are able to buy assets well under replacement costs with in-place rents that are probably 30 to 40 per cent below market. I don’t know what asset class in Canada you can say that (about).”