While development land continues to become more scarce and expensive in Canada’s major cities, deals are still being done and buildings are being built. 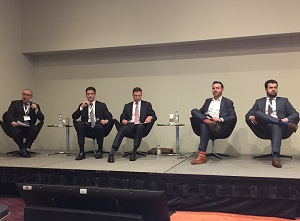 “But I think you’ll see resilience in the low-rise market going forward. I think in the next couple of years we’ll see things be flat in terms of pricing, but 10 years from now today’s housing prices will seem cheap.”

On the high-rise condominium front, Liberty Development’s three-tower, 1,100-unit Cosmos Condos development in Vaughan was cancelled last month. While the large majority of proposed condo projects are completed, the number of cancellations has grown over the past year and can largely be attributed to:

“You need to make sure that you can build in the market that you sell your condos in,” said JLL Capital Markets senior vice-president Bryce Gibson, who acknowledged the temptation that high condo unit prices present to developers who are looking for a piece of the action.

CBRE executive vice-president Casey Gallagher said big developers with high-demand sites should be able to absorb cost escalations through increased revenue assumptions, but he’s concerned smaller companies or those with inferior sites could run into problems in the current environment.

When talk turned to who’s investing, Avison Young investment principal Mehdi Shokri said major bids in Vancouver are coming from Asian capital, including Aoyuan Property Group and Landa Global Properties Ltd., which both have offices in the city. Shokri said many local Canadian companies are also in the mix, but they’re being more strategic and looking for more structured deals and partnerships.

“As the planning world right now is a little bit murky, I think more and more foreign groups are going to need to partner with somebody local,” said Gibson, adding that many established local companies have done substantial deals worth more than $70 million in Toronto. “When you go a bit further afield, you might see more land banking investment from foreign capital.”

Keyzer said Middle Eastern investors, including DAMAC Properties from Dubai, are interested in investing in “a macro-economic and geopolitically safe environment” like Canada. He said there’s been overbuilding in Dubai and much of the country’s economy is based on the price of oil, which dropped steeply in 2014 and has yet to make a significant recovery.

“It’s a very capable group that’s primarily in Dubai but is now in London and is looking at North America,” Keyzer added. “We’ve been working with them on some sites.”

Gallagher said more high-rise condos are being built in Montreal, where the investor pool is a bit more localaized than in Toronto or Vancouver, and he believes there’s a tremendous opportunity to build more.

“We have Canadian institutions that are extremely smart and have a lot of capital and the ability to play the long game. But if they see an opportunity in the near term, they’ll also transact.”

Gibson said there are “opportunities in the mid-rise, mixed-use space” along Toronto’s Danforth Avenue, which features a subway line. Keyzer also likes Danforth and farther east in Scarborough, which he thinks could be “a really big value play” as long as it’s served by reliable and efficient public transit.

Shokri said industrial is a very attractive asset class in Vancouver, though land scarcity is forcing developers to be more creative.

He noted three successful stacked strata industrial projects have launched, and he believes the concept has legs. He also thinks there are good opportunities for condo developers in the suburbs of Surrey, New Westminster and Coquitlam.

Among the panelists’ biggest concerns are: uncertainty about upcoming municipal and provincial election results, should new politicians come into power; and delays in public transit development. While they all anticipate small interest rate increases over the next 12 to 18 months, they don’t expect them to have a major impact on the real estate market.