Fibre optic should be factor in choosing offices

As the Internet becomes a more crucial part of many business activities, the importance of fibre optic connectivity to deliver peak performance should be taken into greater consideration when companies choose office space. 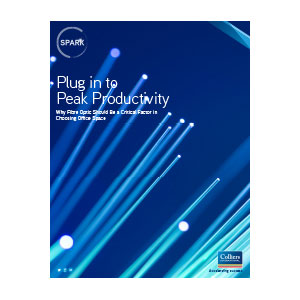 “One amenity that doesn’t get talked about a lot is the physical infrastructure that is necessary for many businesses to efficiently complete their day-to-day operations,” said Colliers International senior analyst Shawn Gilligan, who was the primary author of a new report titled “Plug in to Peak Productivity.”

“With many companies trying to cut costs or increase productivity by using Internet-based accounting, cloud computing or other software programs, it only seems intuitive to also have a productive Internet to allow for maximum productivity with all of these different programs that companies are trying to adopt.”

The report includes a graph comparing different levels of broadband and fibre optic Internet speeds for downloading such things as: a four-megabyte PDF report; a 600-megabyte 45-minute high-definition marketing sales video; and a 10-gigabyte archive. The differences are very dramatic and, when performing numerous large-bandwidth tasks throughout the day, the opportunity costs from having a slower Internet connection can add up quickly.

However, with the high cost of installing a fibre optic Internet network, along with service provider fees, many office suites in the Greater Toronto Area and across North America aren’t using it. This could pose problems for tenants both in the short term and farther down the road since many companies sign long-term leases and need to take their future connectivity into consideration when looking for office space now.

Even when a neighbourhood underground network is constructed and buildings become fibre-available, individual buildings still need to be wired throughout each office suite.

Installing fibre optic isn’t always an obvious decision for building owners and managers because risks can also come along with it, according to Gilligan.

“Wiring it through all of the suites is expensive and, if your tenants are unaware that this service exists, it might not be worth it to spend all that money. Then, if you wire the building throughout and the service fees are so high that businesses say they don’t want to pay for it or don’t think it’s worth it or are unaware of the gains, then you’ve wasted all of that money in installing it throughout.”

Colliers infrastructure manager Bede Searchfield said in the new report that the company has become so reliant on Internet bandwidth that buildings without fibre optic connectivity are no longer an option. Colliers isn’t alone in having that corporate view and if it hasn’t happened already it seems inevitable that it will eventually start having an impact on the bottom line for landlords.

“I don’t know if that’s going to lead to higher vacancy rates or lower rental rates, but it’s definitely a competitive advantage in attracting many types of tenants,” said Gilligan.

York Region, which includes the City of Markham, has been particularly proactive when it comes to fibre optic connectivity. The region north of Toronto believes that its availability can benefit economic and employment growth.

Markham is recognized as Canada’s high-tech capital with approximately 1,000 high-tech and life sciences companies and the highest concentration of information and communications technology businesses per capita in Canada. The city is home to more than 400 Canadian head offices, including those of IBM, AMD, Huawei, Toshiba, Lenovo, TeraGo Networks and General Electric. Telus, Alcatel-Lucent, Primus Business Services and CenturyLink have located their data centres in Markham.

“When you commit that deeply to having your entire city and within the next eight years an entire region reach one terabyte per second download speed, you’ll probably be more willing to reach out to different telecommunication providers and land and building owners to work together,” said Gilligan. “You really need good cohesion between those three groups: the city, the telecommunication providers and the building owners.”

Gilligan said he couldn’t look too closely at other cities across Canada for the report. However, he mentioned that Ottawa is doing a good job of improving its fibre optic connectivity — though not as good as Markham. He also cited that Waterloo, Ont. is trying to make improvements while Telus is making major investments in Vancouver to do the same.