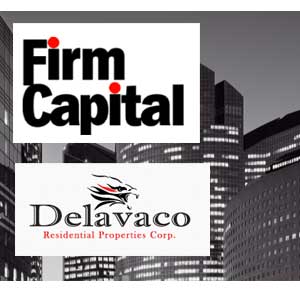 Firm Capital, which purchased an eight per cent stake in Delavaco (DVO.U-X), is now managing the restructuring of the American real estate company after deciding it made more sense to fix the financially troubled outfit than to sell its position.

Firm Capital was tasked by other significant shareholders to steer Delavaco out of the ditch after the chief executive was shown the door. The Toronto-based company took over day-to-day operations in November.

“We weren’t happy with how things were progressing and neither were existing shareholders as you could imagine. Mounting losses, negative working capital burn rates, it was just completely mismanaged,” said Sandy Poklar, Firm Capital’s chief operating office and managing director of capital markets and strategic developments.

What stays, what goes?

Delavaco started out with a portfolio of single-family homes in New Jersey, Atlanta and South Florida as well as three apartment buildings in South Florida and Texas.

Firm Capital’s strategy is to continue to sell off the portfolio of South Florida homes and use the proceeds to pay off senior secured notes sitting on the U.S. company’s balance sheet.

To date, there are about 80 homes in Florida still to be sold. The Atlanta portfolio, which is creating a cash drain for Delavaco, is also on the auction block either individually or as a portfolio.

Firm Capital has decided to retain Delavaco’s New Jersey single-family portfolio valued at about US$7.5 million.

“The only problem that the company had was it was mismanaged,” said Poklar.

Occupancy of that portfolio has risen from about 65 per cent to the mid-80s recently. Long-term plans are to refinance the debt associated with the portfolio at a lower cost.

The multi-res assets, valued at about US$35 million, are also a keeper, as they feature high occupancy and spin off cash.

“That group of assets, the apartments, plus the New Jersey single-family home portfolio will be basically generating positive cash flow for the company . . . which we will use as the basis with which we will ultimately reorganize the company,” said Poklar.

Once the cleanup is completed, plans are to rebrand Delavaco as Firm Capital American Realty Partners Corp. with a new set of top management.

“The goal is, once certain criteria are met, certain thresholds, we will rebrand with a new senior management team and new board of directors.”

Firm Capital, which manages more than $3 billion in assets under a number of silos (including real estate mortgage investments, real estate and capital markets investments and short-term bridge financing) wants to replicate its successful Canadian business model in the U.S. using Delavaco as a platform.

“The goal is to do exactly what we do in Canada in terms of the mortgage side, as well as the real estate side of our businesses. Instead of having multiple platforms, do it on one platform in the U.S., denominated in U.S. dollars.”

Firm Capital has been active in the States and has made loans to American firms, but has always made them in Canadian dollars to avoid foreign exchange risk.

“This now gives us the opportunity to do exactly what we were doing with existing relationships as well as develop new relationships, but to do it with U.S. dollars,” he said.

Firm Capital brass sees a U.S. market niche it hopes to exploit: bridge lending at levels below those in which U.S. institutional investors currently participate.

“There is a real niche below that, and we will be targeting that niche,” Poklar said.

The company intends to target core markets along the Eastern seaboard such as Boston, New York, Miami and Atlanta: “Markets that we know very well,” said Poklar.