First Capital Realty Inc. enjoyed a positive second quarter and  made some major acquisitions in Toronto, both of which are contributing to the optimism that’s evident within the company. 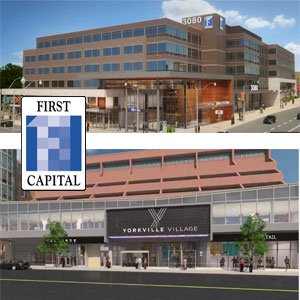 “The trends in retail are evolving and changing very quickly, and we have been proactive for many years to take action so that we create opportunities from these trends, which we are now benefiting from,” said president and chief executive officer Adam Paul. “The future at First Capital looks very bright.”

First Capital owns interests in 161 properties totaling approximately 25.2 million square feet of gross leasable area and some of its most recent acquisitions are in prized locations.

The centre of DT Toronto

First Capital has entered into a binding agreement to purchase 85,000 square feet of new retail space and 52 commercial parking stalls in a centre ice location in downtown Toronto at the southeast corner of Yonge and Bloor streets for a cash purchase price of $189.2 million.

The property comprises three levels with more than 220 feet and 270 feet of high-visibility frontage on Bloor Street and Yonge Street respectively. The space at the busy intersection is at the base of a 76-storey condominium tower with approximately 760 units that should begin to be occupied this fall. It also features a direct connection to the Bloor-Yonge subway station that’s used by more than 400,000 passengers daily.

Forming the eastern gateway to this high-end retail strip on Bloor Street will be Canada’s first Nordstrom Rack, occupying a 39,000-square-foot space. First Capital is looking to secure tenants for the other 46,000 square feet that’s presently under construction and expected to be ready for occupancy in late 2017.

At another major Toronto intersection, the northeast corner of Avenue Road and Lawrence Avenue,  First Capital has entered an agreement to purchase an assembly of properties, that includes a Pusateri’s Fine Foods gourmet grocery store,  for $63.2 million.

“We are focused on assets in Canada’s major urban markets that are exceptionally well-located in areas where the population is growing at a faster rate than retail square footage, and where we can enhance value by applying the capabilities of our platform,” said Paul. “Both of these assets fit that strategy very well.

“In the case of Yonge and Bloor, the population of Yorkville is set to more than double over the next five to 10 years, which bodes very well for rent growth as retail space will lag that growth, so we are delighted to add to our existing position there.

“In the case of Pusateri’s, this is one of the best grocery sites in the country, with Pusateri’s reopening a renovated flagship store that is even better than their very successful former store in this location.”

At the edge of downtown TO

Earlier this year First Capital joined with the Canada Pension Plan Investment Board and paid $26 million to Mondelez Canada for a 50-per cent interest in the 27-acre former Mr. Christie bakery site at the northeast corner of Lake Shore Boulevard West and Park Lawn Road. First Capital will be the managing partner responsible for development, leasing and property management.

“The preliminary redevelopment vision for the property is for a revitalized mixed-use community with a quality urban design that integrates a range of uses and densities near the city’s waterfront,” said Paul.

“This is an opportunity for us to incorporate the best of what we have learned over many years in retail-focused urban development to create a large, modern, vibrant and sustainable urban master-planned community in Toronto. We will take the next while to work with the City, neighbouring communities, our partner CPPIB and other stakeholders to ensure we create the best possible redevelopment of this important site.”

Other purchases and planning ahead

First Capital purchased Cliffcrest Plaza, a 72,000-square-foot shopping centre located on 6.9 acres of land in the southeast part of Toronto, for approximately $31 million. Its tenants include Shoppers Drug Mart, Dollarama, CIBC and Scotiabank. An additional 17,500 square feet of density can be added, and a new LCBO pad is expected to account for approximately 8,000 square feet of that.

First Capital also has major redevelopment projects underway that Paul said he’s excited about because such assets are near impossible to buy and they’re creating value that will greatly enhance the company’s portfolio.

“Phases of our Brewery District project in downtown Edmonton have recently opened with tremendous success. I think this is one of our best developments yet. And of course we have Yorkville, King High Line in Liberty Village and our Yonge and Lawrence redevelopments in Toronto, and Mount Royal Village in downtown Calgary, that are all active.”

First Capital’s funds from operations for the three months ended June 30 were $66.4 million, up from $59.5 million from the same quarter a year earlier. The total portfolio occupancy rate improved to 95.2 per cent from 94.7 per cent.

“Real estate is a long-term business that shouldn’t be measured in three-month increments,” said Paul. “That being said, our Q2 results and year-to-date results clearly have us heading in the right direction, which is something we are very satisfied with.”