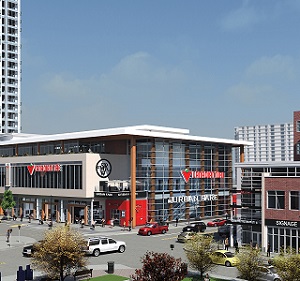 RENX has learned that during the past year or so First Capital, in joint ventures with Allied Properties REIT (AP-UN-T), has purchased three properties in the trendy inner-city community.

Ralph Huizinga, First Capital’s vice-president, acquisitions and development, Western Canada in Calgary, says the properties are low-density but “we will continue to manage and lease until the market supports redevelopment.”

“They’re not huge purchases, but they’re significant land positions and lend themselves to some higher-density development. That’s where you can put the towers in. On 10th and 11th (Avenues).”

The three properties are:

Calgary Beltline “the place to be”

“We think the Beltline is the place to be in the next 20 years for mixed-use development,” says Huizinga. “We’re taking positions that offer decent holding income, but more importantly provide opportunities for future redevelopment.

“We’re obviously retail-focused, but we recognize that urban development increasingly will be mixed-use and so the intent is then to have one or two levels of commercial and residential above. That’s the program we think makes a lot of sense and one that the city is fond of promoting.”

Huizinga says it’s premature to talk about any specific future plans for the sites.

He says First Capital will continue to look for other similar properties in the Beltline either as joint ventures with Allied or on its own. Allied already has a significant presence along 10th Avenue in that district, owning several older buildings.

“We’ll go a little broader, a little further afield, in the Beltline, further south than Allied has. We’re very bullish on 17th Avenue and we’ve got some significant positions there as well.”

Huizinga says Calgary’s downtown core is taken up with many office towers. The Beltline offers an opportunity to do plenty of infill and mixed-use development.

“The demographics are better in the Beltline than they are downtown in our mind. They’re strong for residential plays and it’s, I think, a more walkable community,” he says.

First Capital has developed a strong presence along and near the popular 17th Avenue strip.

One of the properties in First Capital’s portfolio is Mount Royal West, a mixed-use development one block north of 17th Avenue. A three-storey building nearing completion will house an Urban Fare store at street level, a Canadian Tire store on the second level, and medical office use on the top level.

Vancouver-based Bosa Properties‘ 34-storey residential tower, The Royal, is also being built on the site.

“We’re turning over our retail podium to our tenants beginning in May for their fixturing,” says Huizinga. “The fixturing periods for our tenants are anywhere from two to six months.”

City reconstruction of 17th Avenue is helping to make it more pedestrian-friendly. The avenue has plenty of retail as well as pubs and restaurants.

“The thing that’s missing in our mind, and the thing we’re trying to promote more, is fashion-oriented uses and higher-end retail. Those are the kinds of uses that we’re promoting to steer the retail mix a bit away from a heavy proliferation of pubs and restaurants,” says Huizinga. “We lack a Robson Street (Vancouver) or a Sainte Catherine Street (Montreal) or a Bloor (Toronto) in Calgary.

“We think 17th Avenue can serve that purpose, in addition to having a healthy number of pubs and restaurants.”

First Capital’s portfolio also includes the block between 8th and 7th Street along 16th Avenue S.W., which is home to the Mount Royal Village shopping centre and across from the Mount Royal West development on the east side of 8th Street.

Huizinga says First Capital does have plans for the east side of that block adjacent to the Village “but those plans are retail-driven.

“The retail interest we had prior to the latest downturn hasn’t evaporated, but it’s been shelved pending renewed confidence in the Alberta economy. That’s a fairly prevalent refrain we’re hearing from a lot of retailers. They’re lukewarm still and holding off on significant investment in Alberta until they see how we recover from the last downturn.”

First Capital also owns or controls most of the block west of 8th Street on the 17th Avenue on the north side. Huizinga says Truman Homes owns one piece of property there and “we’re talking to them about a joint venture.”

“It’s the same sort of program as we envision east of Mount Royal Village and it’s been consistent with what the city has permitted along 17th Avenue. The city doesn’t want to see huge towers along 17th Avenue,” he says.

The idea would be for retail at street level and some residential floors above.

During fiscal year 2017, the company reported its total portfolio occupancy increased 1.2 per cent to 96.1 per cent from 2016.

First Capital invested $157.7 million in development and redevelopment during the year, acquired six properties and increased its interest in two existing properties for $287.2 million. It also disposed of interests in eight properties, three land parcels, and one surplus building for $90.1 million.