A rundown strip of Montreal’s historic Red Light District is about to undergo major changes as part of a redevelopment project that saw its initial launch delayed by two years by the Quebec government. 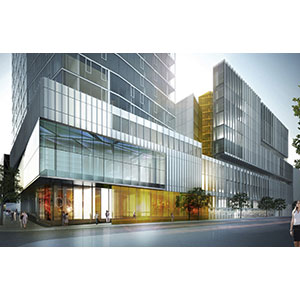 The Société de dévelopment Angus (SDA) is going ahead with a mixed-use development of a stretch of Saint-Laurent Blvd. – also known as the Main – from Ste-Catherine Street to the Monument National theatre.

The $115 million Carré Saint-Laurent project will connect with the eastern fringe of Montreal’s Quartier des Spectacles entertainment district. Its first phase will include office space, cultural organizations, a public market for food and related products and underground parking.

“This redevelopment at the city’s cultural epicentre will reinforce the zone’s historical and symbolic significance,” the SDA says. It intends to use green building techniques and will integrate some of the architectural elements of the existing buildings.

A stop then go project

SDA acquired nine lots on the block over a period of several years and in 2013 announced plans for a project that would have seen the transfer of hundreds of Quebec civil servants who are housed in various offices in Montreal. The initial project, then valued at $160 million, would also have seen the construction of 150 condo units.

But in the midst of austerity measures, the newly elected Liberal government said in June 2014 that the project was an unjustifiable use of public funds and tried to put a stop to the lease of the office space. The government expressed concerns about what it considered the high cost of a 25-year lease signed by the former Parti Québécois government.

However, Quebec gave the green light to the project in February after the terms of the deal were renegotiated. Under the new deal, the rents during the lease remain unchanged, but the government has been given an option to buy the office space at a preferential rate at the end of the 25-year period.

About 700 Quebec government workers are scheduled to move into the eight-storey office complex in 2020.

A 175-spot, three-level underground parking garage will also be built, with more than 100 bike parking spots accessible via a dedicated bike access ramp.

Les Halles Saint-Laurent, a public food market, will set up shop on the ground floor of the complex in 2019. The 15-metre tall retail market will have more than 50 independent merchants and no major chains.

In the second phase of the project, about 150 housing units are planned for the residential sector to be located at the corner of Sainte-Catherine St. and Saint-Laurent Blvd.

Overall, the project will comprise a total area of about 25,000 m2. It is being planned to achieve LEED-CS certification.

The SDA also faced opposition from Café Cleopatra as it bought up property on the street. The iconic strip club has been around since 1976 and is located in a building that dates from 1899. After many efforts to expropriate the building, the SDA decided to bypass the establishment and build behind it, on neighbouring Clark Street.

The area under development was once home to the Montreal Pool Room, famous for its steamed hot dogs. However, the restaurant moved across the street years ago.

As well, due to safety reasons, SDA was ordered to demolish several buildings on the site that date from the late 19th and early 20th centuries. Materials from the historic buildings will be incorporated into Carré Saint-Laurent.

Demolition of two buildings that are still standing in the northern and southern sections of the site is slated in the weeks ahead, and the southern façade will be dismantled and stored.

The non-profit SDA was founded in 1995, and is behind the Technopôle Angus urban renewal project that transformed a vast tract of former Canadian Pacific Railways rail yards in the city’s east end into a massive housing and commercial project.

SDA also developed and owns Le 2-22 Ste-Catherine on the corner of St-Laurent Blvd. (across the street from Carré Saint-Laurent), which houses, among other things, a cultural information counter and ticket booth for entertainment.