When it comes to homebuying, the Nova Scotia village of Wallace, on the far side of the Wentworth Mountains, might not be the first place that springs to mind. 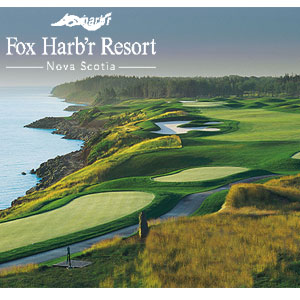 But thanks to the ambition of a local boy who did well the village is home to Fox Harb’r Resort, arguably Atlantic Canada’s top golf destination and housing development.

The Canadian billionaire and co-founder of the Tim Hortons fast food chain, Ron Joyce, grew up in nearby Tatamagouche and knew of the area’s spectacular beauty. In 1987, he bought 1,100 acres of wilderness that included six kilometres of ocean frontage overlooking the rugged Northumberland Strait.

“It’s a one hundred per cent lifestyle play,” according to Kevin Toth, the resort’s president.

People who purchase one of the architect-designed homes on the resort’s property get much more than just a house. Toth says they’re buying into an experience that includes golfing, a sporting lodge, fishing and much more.

When it comes to the competition in the housing development field, Toth says, “We stand alone.” Rather than building on speculation, the Fox Harb’r residential development is 100 per cent funded.

“You’re not buying into somebody else’s dream. Ron (Joyce) already had the dream, and he built the dream,” Toth notes.

“I think from a security point of view, it’s very unique. Most resorts, just by the nature of them, are under-funded until they get to a certain maturity. Here you have something that’s already got a legacy and that’s security.”

Harb’r Stone Village, the first of four planned phases of residential development, contains 18 homes and 18 townhouses. Quarter shares of a townhouse – which gives the owner 12 weeks annually in the home – begin at $169,000.

Ranging from 2,700 to 3,000 square feet with three to four bedrooms and three bathrooms, the townhouses feature views out over the golf course and the water. They are Craftsman-inspired with floor-to-ceiling windows, and a great room for entertaining.

The executive homes range up to 4,000 square feet and hold up to four bedrooms and four bathrooms. The Edgewood is a custom-built home that offers views out to Prince Edward Island, and includes a living room featuring British Columbia timber firs, a 22-foot ceiling and a two-storey fireplace.

As it stands, Harb’r Stone Village represents a $28-million investment. When the remaining three phases are built, the development will be worth more than $100 million and will contain 156 homes.

The home prices come loaded with extras. They include one golf membership, a share in the company’s vineyard, and the house’s furnishings, among other things.

The first three years of ownership also entitle the home owner to a free one-week stay on Scrub Island in the British Virgin Isles.

And the purchase of the home gives owners access to the many amenities of Fox Harb’r.

Beside the golf course – rated Best New Course by Golf  Digest – the resort has a full-service spa on site; a gourmet restaurant presided over by award-winning chef Shane Robillard, a sporting lodge that offers skeet shooting and fishing, a private runway and deep-water marina.

The onsite amenities also provides a level of service not available to most home-owners elsewhere. They can swim in the junior-sized Olympic pool in the spa, order room service from the restaurants, and choose to have resort staff look after housekeeping if they so desire.

As well, maintenance for the homes is as easy as calling the resort’s front desk and requesting assistance. “If you want to renovate your house, we can do that too,” Toth adds. “Our rates are much lower than a general contractor’s.

“Because we want the houses to stay in good shape and we want our residents to be happy, it’s not necessarily a money-making activity; it’s more of service and maintenance activity.”