George Brown to be part of Daniels Waterfront

George Brown College and The Daniels Corporation have further cemented their close relationship with the announcement that the school will become part of Daniels Waterfront – City of the Arts. 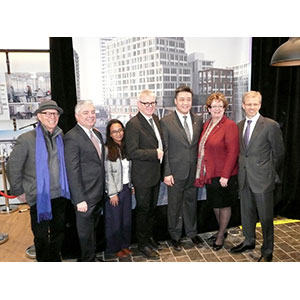 “Academic partnerships have a positive impact and provide tremendous value in this community,” said Daniels vice-president Martin Blake on Monday to announce the public-private partnership at the development taking shape on downtown Toronto’s Queens Quay East.

“George Brown College and The Daniels Corporation are both, in essence, city builders. We have shared values that include making Toronto a better place for everyone.”

George Brown and Daniels’ other partnerships

Daniels Waterfront – City of the Arts was announced in March 2015 and, at that time, it was mentioned by the developer that it would explore possibilities for new programs with George Brown. The partnership between the two parties began with Paintbox Catering & Bistro in Toronto’s Daniels Spectrum, a café and catering company staffed by Regent Park residents who received basic training at George Brown’s chef school. It continued with the fashion exchange program, a collaborative fashion hub designed to improve employment opportunities for immigrants and youth in Regent Park, while providing manufacturing expertise to emerging designers and companies.

“It seems that every time we work together, our projects grow in scope and impact,” said George Brown president Anne Sado. “We now look forward to being part of the vibrant mixed-use community being built right here.”

George Brown’s School of Design, including a new Innovation Exchange and a new home for its Institute Without Boundaries, will be an addition to its waterfront campus and be located close to its Daphne Cockwell Centre for Health Sciences and the new student residence, The George, which opened last year.

“Our Innovation Exchange will be a research, innovation and training centre focused on design solutions for the smart economy,” said Sado. “It will provide students with hands-on experience and specialized skills while giving industry partners the research and innovation support they need to scale up and commercialize new products and services.”

Sado added that the Institute Without Boundaries “works with partners across the city and around the world to develop innovative local solutions to 21st century global challenges.”

The new 103,000-square-foot George Brown location will employ 650 people during construction and 300 faculty and staff members once it opens in the fall or winter of 2018. Approximately 1,800 students will study there, taking programs including: graphic design; interaction design and development; game development, programming and design; concept art for entertainment; interactive media and design management; and interdisciplinary design strategy.

“Students use transit at a higher, deeper and more frequent rate than any other demographic in Toronto and Ontario. When you put a university or college into a new neighbourhood, you put transit riders into that community. Their use of transit creates a stronger system that residential and commercial developers are attracted to.”

Sado anticipates further growth of the waterfront campus after receiving city council approval for the sale of a parcel of land just north of its Daphne Cockwell Centre for Health Sciences as a future George Brown location.

“We’re still in the exploration and planning phases, but hope to have more details to share soon,” she said.

The site will also feature: Sugar Beach North, an extension of the existing waterfront park with its distinctive pink umbrellas, on the north side of Queens Quay; and another public space called The Yard.