Global commercial real estate investors are shifting their focus toward secondary cities as property prices have soared in larger centres. 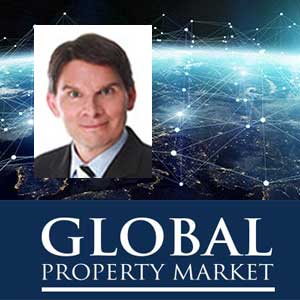 “We are now seeing more transactions in secondary cities. It is a very consistent theme, even though we are seeing regional differences. Investors are looking for higher-yielding opportunities in smaller cities around the world.

“The pricing in major cities is seen to have reached unsustainable levels.”

Major cities have seen much higher increases in pricing than the national averages, said Green-Morgan, speaking this week at the Global Property Market in Toronto.

The move to smaller cities has been accompanied by seven consecutive quarters of slowing international CRE property investment activity, according to Green-Morgan.

The size and number of big deals of a billion dollars or more has been a factor in the dropoff in global property investment.

“The size of the deals seems to be getting bigger and the amount of money going into real estate seems to be exploding over and over again.” said Green-Morgan.

“The only area where we are seeing growth in the billion-dollar deal is land transactions in emerging markets. Land is getting much more expensive to buy and that is probably why, when you look at income-producing properties, you will see that volumes are down six per cent so far in 2017 compared to 2016.”

Not a homogeneous picture

It is not a homogenous picture around the world, he cautioned.

“It has been in N.A. where we have seen the greatest slowdown in transactional activity.

“New York has seen the biggest slowdown in 2017, even though it continues to be the most traded real estate market around the world.”

In New York, there has been a real dropoff in very large deals in 2017 compared to what was experienced from 2013 to 2016. A primary reason for the decline is a pullback by Chinese investors, who have experienced restrictions in the flow of capital over the last 12 to 16 months.

“Asia-Pacific and Europe continues to have quite positive momentum in terms of investment volumes but this hasn’t always been the way,” said Green-Morgan, who is responsible for markets from India to New Zealand, looking at both micro and macro trends for Real Capital.

“A couple of years ago, Asia was really lagging the world in transaction activity. However, very large deals in Hong Kong, Singapore and a huge number of transactions in Australia has really boosted the activity in Asia Pacific in the past year.”

There has also been a large flow of capital into the Hong Kong market, with much of it coming from wealthy domestic investors, he said. Plus there has been a huge amount of money flowing out of Hong Kong into European property investments.

“Asians have overtaken North Americans as the biggest movers of capital in the world,” said Green-Morgan, an expert in cross-border capital flows. This trend was initially driven by Chinese money, but has been taken over by Singapore, Hong Kong and other Asian investors.

Europe continues to have consistent transaction volumes, though the City of London is a bit of an outlier.

Transaction volumes have declined in London since Brexit, although pricing has hardly changed. Capital coming from Hong Kong has helped to maintain transaction volumes, but primarily it has kept pricing stable.

He added the disconnect between the number of transactions and the lack of impact on pricing is a trend that has emerged in other cities. But, it is more pronounced in London.

Retail, particularly shopping centres, has seen a consistent decline in transaction volume around the world with the exception of Australia.

Australia is one of the few countries where retail pricing is holding up, because its citizens are late adopters of Internet shopping. Amazon just opened in 2017 in Australia with retail logistics and warehousing coming together.

Indicative of the drop-off in retail transaction activity, Real Capital Analytics recorded only $400 million of shopping centre transactions in the third quarter of 2017 according to Green-Morgan.