UPDATED WITH NEW DETAILS: Google has signed a long-term lease for all 18 floors and 400,000 squar... 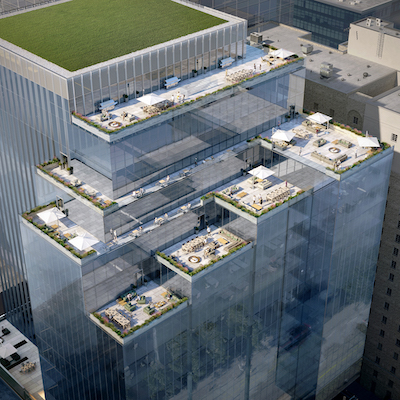 UPDATED WITH NEW DETAILS: Google has signed a long-term lease for all 18 floors and 400,000 square feet of office space at the new 65 King East Tower in downtown Toronto.

The agreement was announced Thursday afternoon by Carttera and its ownership partners including OPTrust, Manitoba Civil Service Superannuation Board and Investment Management Corporation of Ontario.

It is part of a wider announcement by Google which also includes new offices and expansions of the tech and online giant’s operations in Montreal and Waterloo.

“We are extremely pleased to announce that 100 per cent of the office floors of 65 King East are now leased to Google: one of the most prominent, influential and well-recognized companies in the world,” said Dean Cutting, partner, Carttera, in the release. “Our vision for 65 King East has always been to combine innovative office architecture and an employee-centric workplace design with a dynamic, forward-thinking organization.

“The fact that Google made a long-term commitment to our project is a testament that we are leading the future of innovative office design. We look forward to a long-term collaborative relationship with Google for many years to come.”

“As one of the world’s leading technology companies, Google is also focused on the future and we are thrilled to have reached a long-term commitment on their new Toronto headquarters,” he said in the release.

While the owners of 65 King East are expressing their delight, it’s also a good day for another office owner. Allied Properties REIT will welcome Google to two of its major holdings in Montreal and Kitchener.

Google said it will establish an office for up to 1,000 employees at 425 Viger West in Montreal. All of its Montreal-based software developers, game developers, sales leaders, AI researchers and Cloud experts will move to the new office.

The new Viger space will span five floors of the building. 425 Viger West is a 200,000-square-foot facility which is being retrofit and expanded by Allied to add another 100,000 square feet of space.

In an interview with RENX a few months ago, CEO Michael Emory said the building was almost fully leased.

Google will also be launching the first Google for Startups Accelerator in Canada at the Breithaupt Block Phase III, a new office building currently under development in Kitchener, east of Toronto.

The 11-storey, 294,054-square-foot Phase III building is adjacent to Google’s current office in the two existing buildings at Breithaupt Block (which has been its largest Canadian location).

The accelerator will be Google’s 12th accelerator globally and facilitate the company’s work with emerging Canadian companies.

The Breithaupt Block Phase III is being developed by a partnership between Allied and Perimeter Developments. Google’s lease will be for 15 years and the $157-million building is expected to be ready for occupancy starting in 2022.

The three new offices will give Google the capacity to expand its Canadian workforce from about 1,500 to 5,000 employees.

65 King East is currently being built by PCL Construction. The design is a collaboration between world-renowned architects IBI Group and WZMH Architects. 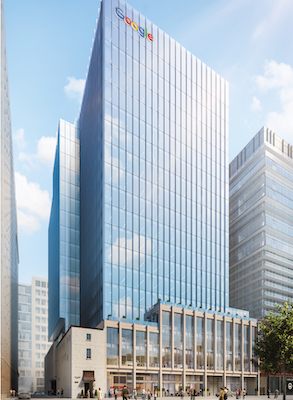 Located in the St. Lawrence neighbourhood, 65 King East is steps from the financial core at King and Yonge and is less than a 10-minute walk to Union Station with seamless connections to the TTC, Go Transit, Via Rail and the UP Express.

65 King East has dedicated approximately 18,000 square feet of terrace space over eight floors, offering expansive views of the city and lake, and is designed with a raised floor HVAC system and exposed concrete ceilings.

Google’s tenancy is a consolidation and relocation of offices in the Greater Toronto Area, with occupancy expected in 2021. The transaction also consolidates another major technology player in downtown Toronto’s burgeoning, and rapidly expanding, tech sector.

“This is a significant statement of confidence in Toronto’s tech market and talent pool.”

With net assets of almost $20 billion, OPTrust invests and manages one of Canada’s largest pension funds and administers the OPSEU Pension Plan, a defined benefit plan with almost 95,000 members and retirees.

OPTrust was established to give plan members and the Government of Ontario an equal voice in the administration of the plan and the investment of its assets through joint trusteeship.

OPTrust is governed by a 10-member Board of Trustees, five of whom are appointed by OPSEU and five by the Government of Ontario.

Carttera is a Canadian real estate investment fund manager and developer. The firm invests its capital in innovative urban intensification development projects and is a leader in environmental sustainability in the Canadian development industry.

Carttera has developed projects extending to over $3.3 billion in total value since its inception in 2005, with primary holdings concentrated in the GTA and Montreal.

The firm’s projects include a wide range of product types including office, mixed-use, industrial, condominiums and rental apartments.

CBRE Group, a Fortune 500 and S&P 500 company headquartered in Los Angeles, is the world’s largest commercial real estate services and investment firm (based on 2018 revenue).

The company has more than 90,000 employees and serves real estate investors and occupiers through more than 480 offices (excluding affiliates) worldwide.

In Canada, CBRE Limited employs 2,200 in 22 locations from coast to coast.