For a long time, St. Clair Avenue West in Toronto’s Midtown West neighbourhood was an area largely devoid of development. 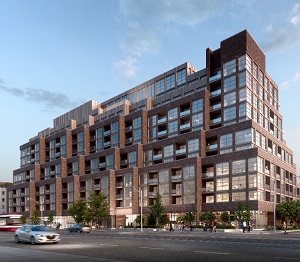 During the past 10 years the area found itself ignored by developers in favour of more desirable — at the time — surrounding neighborhoods like The Junction, Corso Italia and The Stockyards. That began to change when Graywood Developments launched the six-storey SCOOP condominiums at 1771 St. Clair West in 2016, sparking new interest in the area.

Purnomo trained as an architect and practised architecture for the first decade of his career in New York City. He ended up in Toronto eight years ago because of the many development opportunities present in the city, and joined Graywood four years ago.

The company’s interest in midtown was piqued when the city began studying whether to allow densification along St. Clair West about seven years ago, he said. At that time, though, appeals from local residents put potential developments on hold.

“There are TTC and street car lines already existing along St. Clair. It’s a transit-oriented community which is easy to develop because it’s already got infrastructure,” Purnomo explained. “It’s also got a great main street presence where there are a lot of traditional stores that have been there for a while.

“It’s got a good neighborhood feeling.”

The community profile fits in with Graywood’s specialties. The Toronto-based developer focuses on both urban infill and low-rise development.

The company dates back to the 1980s when it was founded by Garnet Watchorn and Moshe Tamari. To this day, Watchorn is still with the company and remains on it’s advisory board, looking over Graywood’s investments.

When first established, it dealt primarily with low-rise projects and land development; the company would purchase land before selling it to other developers. As it grew, Graywood began moving more into development.

Work with other builders

“It was a slow process. In the past we had been paired up with other builders in the area, especially on the low-rises,” said Purnomo. “That’s something we’re going to start pursuing more often for future projects.

“Not only are we going to raise the money for a project, we become the developer and then build it as a construction manager. That’s the goal.”

Graywood saw St. Clair West as a chance to expand and refine the company’s philosophy of end-to-end user service. Graywood itself only owns three plots of land in the area; one for its 72-unit, six-storey SCOOP condominium project which launched phase one in 2016 and is expected to be complete in fall of 2019.

The other two plots of land will be combined into a single development under the name SCOUT, expected to launch in fall of this year with construction hopefully starting by 2020. The proposed 12-storey, mid-rise, multi-residential project will have 268 units and function as a sister development to SCOOP.

Both mixed-use developments offering a range of condos from one-bedroom units to two bedrooms plus a den, which can be converted into a third bedroom. Designed by SMV Architects, with interiors by TACT Design, SCOUT units range from 410 square feet to 1,260 square feet with prices starting at below $500,000.

The buildings contain retail components on the ground floors; three small retail locations in SCOOP and 8,000 square feet in SCOUT.

SCOOP a “catalyst” in Midtown West

“We started with a small building that we see as a catalyst. We’ve taken the chance that something is happening in the neighbourhood,”  said Purnomo, who has gotten directly involved in the community as a member of its BIA. “We feel that it will lead us to success on our next phase and drive everyone else to thinking about either buying a new home in the area, or opening up a business in the area.”

The company is still looking for other land in the area, but with all the extra attention comes competing bids for property.

In spite of the increased difficulty in purchasing land, Purnomo says Graywood welcomes other developers. He hopes other projects lead to new growth and services, making the area more desirable to potential buyers. Following the initial appeals against densification, residents have discovered how transformative the process can be.

“I think what happened in the past is that people didn’t see the possibilities because they tend to overlook the storefronts because they’re a bit old. We haven’t seen a lot of new stores come in in the last few years, so of course people would gravitate toward [surrounding neighborhoods] which were already developed,” said Purnomo who cites transit-oriented development as a large part of the area’s allure.

“The time has come for St. Clair West to get the spotlight. Especially when you find out that in two or three years from now there’s going to be a GO station and a SmartTrack (commuter rail transit) right in the centre of it. Within the development, the city is planning to build a new subway station that allows you to go to Union Station in less than 15 minutes.”

In addition to its work in Midtown West, Graywood has several other projects under development. In 2017, it launched a high-rise mixed-use development in Toronto’s entertainment district along Peter and Adelaide streets.

The project will be a 47-storey building with two floors of retail and a pedestrian laneway which will be dedicated to the city. The launch is already a success as the 690-unit project has mostly sold out within a month. Construction is expected to start this year, with occupancy in 2022.

For the future, the company has it’s Eastern Avenue project which is expected to launch at the same time as SCOUT this fall. The project is called Wonder and is a similar size to SCOUT, with 250 units, but benefits from being located in the more established Leslieville.