Greybrook has full slate of projects for 2017

Greybrook Realty Partners Inc. has plans for a very active 2017, and it didn’t waste any time with a Wednesday announcement of a $10.9-million investment in a low-rise residential development with Marlin Spring in Oshawa, Ont. 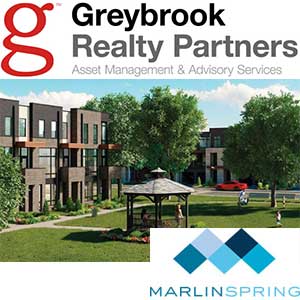 “We’re looking forward to between 10 and 15 acquisitions this year,” said Greybrook Realty Partners chief executive officer and Greybrook Capital partner Peter Politis. “Last year we bought about $350 million worth of land and we expect to do more than that this year.

“It’s a strong market. We have a lot of good partners with a lot of good opportunities so we’re going to take advantage of what’s in the pipeline and hopefully buy a lot of good stuff in 2017. We won’t be buying just for the sake of buying. We’re lucky that we don’t have a machine that we constantly need to churn with lower margin stuff. We always buy stuff that makes financial sense.”

Greybrook closed 2016 with two December acquisitions: a Shelburne, Ont. property co-owned with Fieldgate Homes that’s expected to be developed into a residential community consisting of 246 detached homes; and two parcels of land in Mississauga, Ont. co-owned with Metropia and Sorbara Group of Companies at 3355 The Collegeway and 2277 South Millway that are expected to combine to be developed with 480 stacked townhomes and approximately 12,000 square feet of redeveloped retail and office space.

These and future purchases are being at least partially funded through the October sale of a property at 215 Lake Shore Blvd. E. to Chinese state-owned real estate developer Greenland Group (Canada) for $166.05 million. The waterfront property was acquired in mid-2014 for $60 million by Greybrook Waterfront Limited Partnership, Castlepoint Numa and Cityzen Development Group.

(Image of 250 Harmony Rd. S. in Oshawa, a Greybrook project in partnership with Marlin Spring.)

This latest acquisition in Oshawa includes almost 13 acres purchased from the Durham District School Board that’s the site of a school that will soon be demolished. Politis expects to start sales in the spring or summer and is looking at occupancy in 18 to 24 months after that.

“Durham’s a very pro-development municipality. We’ve had good discussions with the city so far and they’re very highly supportive of the development. It’s also a simple development because the school’s in the middle of a very established area.”

Oshawa is 60 kilometres east of Toronto and is the largest municipality in Durham Region as well as its business, transportation, education and entertainment hub. The development site is in an established community in south Oshawa and in close proximity to Highway 401 and a GO Transit/VIA Rail station.

The development is expected to consist of at least 170 homes, with the majority being townhouses. While pricing will be decided closer to the sales launch, Politis expects it to be in the $575,000 to $650,000 range.

“In the last 24 months, the sales velocity and demand for this type of housing has been very strong,” he said.

This will be Greybrook’s third project with Marlin Spring, with which Politis said it had a “great relationship.” Last year they announced plans for: Tazzo Townes, a townhome project in Markham, Ont. with an estimated completion value of $120 million; and a proposed 99-unit residential townhome community called Woodbridge in Vaughan, Ont. that has an estimated completion value of $87.5 million.

Greybrook has invested in several other Greater Toronto Area developments that have either started construction or will later this year.

The townhouse component of Lower JCT. in Toronto’s Junction Triangle sold out and construction is starting. The Museum Flats condominium component of the development is more than 95 per cent sold and construction will begin in early spring. Renovations have started on the Auto Building, a 10-storey heritage structure built in 1919 that was once the city’s tallest, which will be the new home of the Museum of Canadian Contemporary Art and a number of commercial spaces while sitting at the centre of the new community. Greybrook is partnering on the project with Castlepoint Numa.

Construction has also begun at Garrison Point, a 683-unit condo in Toronto’s Liberty Village, which is being developed in partnership with Fernbrook Homes, Cityzen Development Group and Diamond Corp.

Ground will also be broken this year at: Avenue & Park, a 90-suite condo at 1580 Avenue Rd. in Toronto to be built with developer partner Stafford Homes; 225 townhomes to be built by Stafford adjacent to Toronto’s Downsview Park; and Towns of Cornell, where 201 freehold townhomes will be built by Andrin Homes and Tiffany Park Homes on Highway 7 in Markham, Ont.