Over the past month, Greybrook Realty Partners has been on a buying spree of land suitable for housing to the east and north of Toronto. 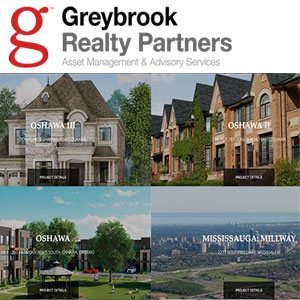 Examples of Greybrook housing projects from the company website.

“Pricing has continued to increase and people are getting priced out of the market, so the Durham Region really offers people a great mix of affordability with the product type that they’re seeking.”

Greybrook contributed $12.965 million to acquire serviced lots in northwest Oshawa that will be used to build the Oshawa III residential community consisting of 243 detached single-family homes and 73 townhomes.

Developer Treasure Hill, a new partner for Greybrook this year, also provided financing to purchase the property from an undisclosed vendor.

“In all of our deals, we make sure that the developers write a sizeable cheque as well,” said Cucuz.

It’s anticipated that sales for Oshawa III will start in late 2018. No pricing will be revealed until closer to that time.

“We usually price units a lot closer to launch because a lot of things can change,” said Cucuz.

“It’s about finding the right price for the consumer. There has to be a buyer on the other end of every sale, so it’s not just about trying to wait for the market and increase prices.”

Greybrook and Stafford Homes have closed on a 7.5-acre infill development site in an established neighbourhood in the northern part of Oshawa, with the Toronto-based asset management firm contributing $4.825 million.

Oshawa II, on a Conlin Road East site, will include more than 110 townhomes upon completion.

Elsewhere in Durham Region, Greybrook is contributing $7.3 million for the purchase of serviced lots in Bowmanville that Treasure Hill will develop into the Orchard West residential community consisting of 151 detached single-family homes.

The Orchard West site is adjacent to recently built low-density residential neighbourhoods and has easy access to Highway 401 and the future extension of Highway 407. The goal is for the project to get underway in mid-2018.

“As transportation infrastructure continues to improve, it’s a natural extension to the GTA,” Cucuz said of Durham Region, which he believes “has still got a lot of price growth to go.”

Greybrook and Treasure Hill are also collaborating on a 53-acre property in King City that’s expected to be developed into a residential community consisting of more than 90 luxury detached single-family homes.

Greybrook invested $24.17 million in the site, which is situated on the southern slope of the protected Oak Ridges Moraine and immediately north of Vaughan and Toronto. The project is expected to get underway in the second half of next year.

“The type of buyer who’s driven to King City might be able to afford a $1.5-to-$2-million price range,” said Cucuz.

“What King City offers people is a really great community that I would consider to be like a higher-end suburb of Toronto. It’s got beautiful estate homes in the area and this product type is more in line with the consumer that’s looking for luxury for less.”

The portfolio of low-rise development holdings managed by Greybrook includes several properties projected to result in the completion of more than 7,000 ground-related homes in the Greater Golden Horseshoe region.