Grosvenor Americas has acquired the final piece for its Burnaby land assembly in Brentwood, where... 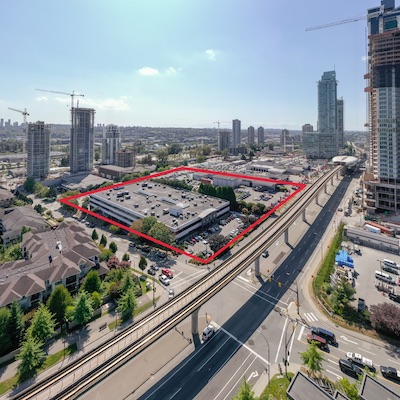 Grosvenor Americas has acquired the final piece for its Burnaby land assembly in Brentwood, where it plans to create a mixed-use development.

Grosvenor Americas paid $167 million for a 4.77-acre site at 4612 Lougheed Highway and 2040, 2140 and 2150 Alpha Ave. It had been owned by the families which operated an on-site car dealership, according to Avison Young Vancouver principal Bob Levine, who was part of the team that brokered the deal.

The acquisition gives Grosvenor Americas a 7.9-acre site immediately southeast of SkyTrain’s Brentwood Town Centre station and south of The Amazing Brentwood development. Its borders are Lougheed Highway to the north, Beta Avenue to the east, Dawson Street to the south and Alpha Avenue to the west.

The site is one of the last full-block, large-scale development opportunities in the rapidly evolving Brentwood neighbourhood. That is what attracted Grosvenor Americas, along with its proximity to transit retail, natural amenities and educational institutions.

“We are in the very early stages of working with the City of Burnaby, but envision a high-density, mixed-use development that could have over 2,000 residential units, including condominiums and rental housing, with approximately 500,000 square feet of commercial space, which could include such uses as office, retail, hotel, et cetera,” said Ward.

The City of Burnaby wants to establish more non-market-priced affordable rental housing. That will be incorporated into the Grosvenor Americas’ development. 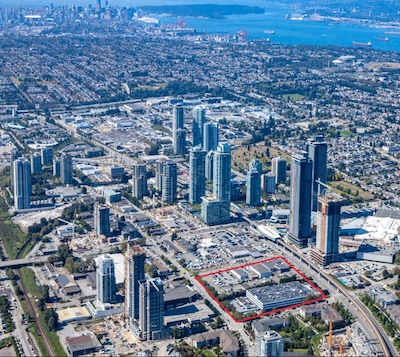 This aerial view of the Brentwood Town Centre area in Burnaby illustrates the intense amount of development the neighbourhood has undergone, and continues to experience. (Courtesy Grosvenor)

Ward called it an “opportunity for us to make a significant community impact, which is something we strive to do with all of our developments, as we intend to be there for the long term.”

Grosvenor Americas will master-plan the site and go through a rezoning process for each phase of the development. Ward said it was too early to establish any timelines.

“In the short term, we have a vision to create opportunities to engage the community in ways that haven’t really been seen before in this neighbourhood,” said Ward.

“We always strive to engage with the community in meaningful ways in all of our projects. We are currently working with the city on those plans and hope to have more to share soon.”

Shape Properties’ The Amazing Brentwood is a 28-acre community with phased plans that include more than 250 shopping and dining options, entertainment, offices, public space and more than 6,000 homes in 11 towers.

The company plans to transform it into a mixed-use development called The Grove that would incorporate condominiums, purpose-built rental apartments and a commercial element.

It’s seeking approval to build five towers reaching up to 51 storeys, four low-rise buildings of up to six storeys, and 280,000 square feet of office, retail and restaurant space.

Grosvenor Americas in B.C. and elsewhere

“Grosvenor has been an active property developer in the Vancouver area for over 65 years,” said Ward. “This acquisition represents one of our largest commitments to date, and exemplifies our enthusiasm for this region.”

Grosvenor Americas is part of the Grosvenor Group, one of the world’s largest privately owned property companies, which develops, manages and invests in properties in more than 60 cities around the world.

Its other development projects include Crescent in San Francisco and Central in Washington, D.C.

Grosvenor Americas had assets under management worth $5.2 billion at the end of 2018.