A $315-million mixed-use neighbourhood is set to rise next to one of the bridges leading into Que... 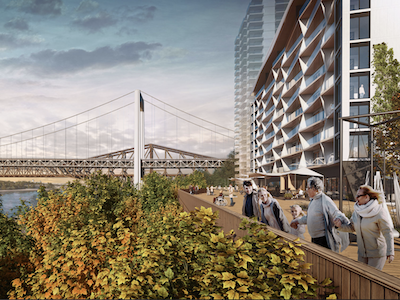 Cocité Lévis is a $315-million, mixed-use development by Groupe Humaco which will be constructed just across the St. Lawrence River from Quebec City. (Courtesy Groupe Humaco)

A $315-million mixed-use neighbourhood is set to rise next to one of the bridges leading into Quebec City. Groupe Humaco plans to begin construction in spring 2020 on its Cocité Lévis project in Lévis, next to the Pierre Laporte Bridge and across the river from the provincial capital.

To be built over a six- or seven-year period on a 600,000-square-foot site, Cocité Lévis will consist of about a dozen buildings, including condos, rental housing, office condos, a hotel and a seniors residence.

“We saw there was opportunity given the location” of the project, said David Leblond, associate director of Humaco Stratégies, one of Groupe Humaco’s three divisions. “We found all the elements were there.”

Cocité Lévis will provide residents and the public access to the shorefront of the St. Lawrence River and a wooded area.

Leblond says Humaco studied a number of mixed-use projects, including Devimco projects in the Montreal area, before going ahead with the development.

Given Cocité Lévis’ location, “we’re practically in Quebec City,” Leblond said. Outside of rush hour, the site is about a 12-minute drive from the old city.

“We believe its distinct elements – the river and the forest – set it apart from all the other developments in Quebec City,” Leblond said. “They can’t compare.”

The second building, which will serve as the project’s tallest and signature structure, will be a 21-storey hotel and office tower with about 150,000 square feet of office space and a 150-room hotel. Construction is slated to begin later next year and take about three years.

Plans call for about 10 storeys of office condos above the hotel, with each floor having a different owner.

“We’re testing the market with a new product that is very rare in Quebec City,” Leblond says of the office condos plan.

So far, the market reception to the concept has been good, but “we’re flexible. At the end, if we see the demand is not there, we’ll convert into a more classical buidling.”

No deal has yet been signed for what will likely be a three- or four-star hotel. However, “we’re not worried” because the site is “well-positioned in the market. We’re very confident.”

Overall, Cocité Lévis will have more than 1,000 residential units, primarily consisting of rental housing, including a 450-unit seniors residence.

While the first condo building will likely attract a middle- to upper-middle-class, baby boomer clientele, the overall project should attract a mix of social classes, Leblond said.

The project will contain a number of ground-level stores to meet the day-to-day needs of people living or working on the site. Leblond said Humaco has been already contacted by everyone from bars to dentists who want to set up shop.

Cocité Lévis, which is being marketed as “fundamentally natural, resolutely urban,” will preserve about 30 per cent of the wooded area currently on the site. It will offer both bike paths and river access.

Lévis’ plans would also reconfigure traffic lanes next to the site to minimize traffic tie-ups.

The project’s Cocité name combines the words “cohesion” and “cité” (city) and signifies that “we want a project that integrates well into its surroundings,” he said.

Groupe Humaco and its partners

The project takes its inspiration from Lévis urban plan, released in 2016, that aims to densify the city.

Cocité Lévis is being financed by banks and private investors, including the Houle family, which owns the general contracting firm EBC (Entreprises Bon Conseil) and is a partner in the project.

Among Humaco Stratégies’ previous developments is Coopérative de solidarité d’habitations Le Mieux-Vivre, an 89-unit housing cooperative for seniors in Lévis that was completed in 2016.