Greater Toronto Area (GTA) investment property sales reached $17.2 billion last year, which was up 12 per cent from 2015 and set a record for a sixth straight year. 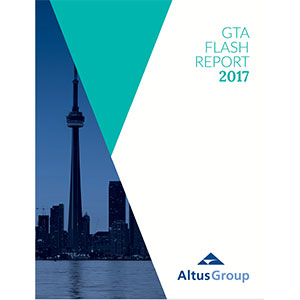 That total included land and office, retail, industrial, hotel and rental apartment property sales. The information was compiled by Altus Group and released in its new “2017 GTA Flash Report.”

Land sales reached new highs and accounted for three-quarters of the year-over-year increase in total investment volumes. Residential land (including lots) rose by $640 million to a record-breaking $5.7 billion. Industrial, commercial and investment (ICI) land sales increased the most, by $776 million, to a record $1.9 billion. The City of Toronto, Halton Region and York Region all had record ICI land sales volumes.

“The growth in land prices will put upward pressure on prices this year, but the growth in prices could be partially mitigated if developers are able to achieve higher development densities on the parcel,” said Altus Group senior director Matthew Boukall.

The 29,186 high-rise residential unit sales in 2016 broke the previous record set in 2011. Approximately nine in 10 high-rise sales were apartment units, with the majority of the remainder being stacked townhouses.

“The low-rise inventory is expected to remain low for the foreseeable future, with any near-term increase in available new product likely to be rapidly absorbed by the market,” said Boukall.

“Compounding the low available inventory of new low-rise product is the decline in resale inventory, which basically means that consumers have much fewer options for single-family and townhouse housing in the Toronto region.”

Office sector investment stayed strong at $3.3 billion last year, pushing it just past its previous record from 2015. About four million square feet of office space is under construction, with about three-quarters of it downtown.

“The office markets have been relatively stable, with strong pre-leasing demand in the downtown core,” said Boukall, who expects more near-term construction to support demand. “While vacancy is up slightly, most of the available space is in smaller blocks, with only one building in the downtown having more than 250,000 square feet available.”

Industrial sector sales rose by 23 per cent last year on the strength of rebounds in Peel Region and York Region.

“The industrial markets have been very strong in the GTA, and 2017 is expected to remain active,” said Boukall.

“Despite a multi-year high of 6.5 million square feet in new industrial space delivered to the market, we have leasing activity outpacing the supply. New industrial space, particularly flex space, has been in very high demand.”

Retail sector property sales increased by 21 per cent last year, though the $2.3 billion total was below the record set in 2011.

Sales of rental apartment buildings were down 29 per cent in 2016, making it the only investment asset class to post a decline. Apartment sales were relatively flat in the City of Toronto, but down significantly in the suburbs.

“The decline in apartment sales is more driven by supply than demand,” said Boukall.

“With the strong rental market — with low vacancy and rising rents — there are fewer sellers of buildings. And those that are being offered are much higher in price, making the returns on newly acquired buildings comparably low.”

Reduced spending by foreign buyers in the office, apartment and hotel sectors reduced overall foreign investment after four years of increases. Institutional investors cut back total investment for the second straight year, mainly in the office, retail and apartment sectors.

“We are expecting to see a comparable level of foreign investment in 2017, but may see more institutional activity,” said Boukall. “The GTA property markets are forecast to be the strongest in the country this year, likely slightly stronger than Vancouver, and activity is expected to be the same or higher given the level of interest from institutional buyers.”