There was continued strength in the Greater Toronto Area (GTA) office market in the final quarter of 2015 and, while there are reasons for optimism in 2016, there could also be some hiccups in store caused by external economic forces. 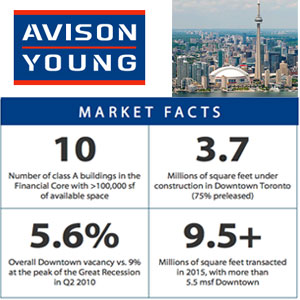 “There are opportunities as well as risks in the marketplace heading into 2016, but there’s decent velocity and demand at the moment,” said Bill Argeropoulos, principal and practice leader of Canadian research for Avison Young, which recently released its GTA Office Market Report for the fourth quarter of 2015.

Downtown led the way with its best 2015 quarterly result with more than 443,000 square feet of absorption and gains in occupied area across all asset classes. There was a noticeable flight to quality, however, with tenants upgrading or moving to the newest developments.

While C- and B-class buildings suffered, as expected, a handful of class-A towers in the financial core also found themselves in the unfamiliar position of having large blocks of unoccupied space.

“These are highly regarded assets with great efficiencies and mechanical systems, and people will gravitate towards these assets,” said Argeropoulos. “Some tenants may have wanted to expand in these buildings but couldn’t because they were well-leased over the years … they now have an opportunity.”

With condominiums sprouting and being filled all over downtown, employers are taking notice and looking to stay close to this growing labour pool largely comprised of people under 40. Technology, infrastructure and sharing economy companies are increasing their downtown presence along with finance-based firms that have traditionally dominated the area.

New construction has focused landlords on retaining tenants, which are enjoying multiple options and price points. Argeropoulos said he hasn’t “seen anything new or groundbreaking” being offered to retain or attract tenants, but there continue to be cash allowances, providing net-free rents for up to a year and another less frequently offered incentive.

“A landlord may entertain taking over a tenant’s lease in another property and assume the lease obligation for that tenant for six, 12 or 18 months in order to attract them to their own premises. That’s a cost to the landlord, but it removes the obligation of that tenant in their existing property.”

“If you were to look at what’s happening downtown, that figure is much higher at around 75 per cent pre-lease. Those developments will do well.”

Of the new product delivered last year, 1.4 million square feet was in Toronto West, where demand hasn’t kept up with supply and there was a 17.1-per-cent availability rate. While it appears the region is being overbuilt, the development community is still showing faith in it as well as in the less vibrant Toronto East and Toronto North markets.

“The suburbs are alive despite this perceived notion of tenants relocating in droves downtown,” said Argeropoulos.

“The confidence is in the number of buildings developers are looking at launching or have launched. The other confidence indicator is the number of investment sales transactions that have happened in the suburbs.”

The availability rate via sublet in the fourth quarter ranged from 1.4 per cent downtown to 2.5 per cent in Toronto West, numbers which have remained relatively stable. They could rise, however, if wider economic problems force companies to cut back on their own space and offer it to others to reduce operating costs.

“Typically, sublets are offered on a discount basis more than for a direct deal, so tenants may take that opportunity to leverage better negotiating terms, be it renewing their lease in existing premises or doing a deal somewhere else,” said Argeropoulos.

“The longer they linger, the more effect it has on direct pricing for landlords.”