Sales will begin for The Gupta Group’s ICONA Condominiums, near the heart of the evolving Vaughan Metropolitan Centre in Vaughan, Ont., on Jan. 25. 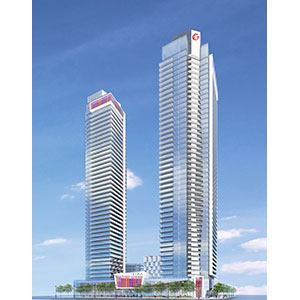 “There will be two towers, 51 storeys and 53 storeys, with a large three-storey podium facing Highway 7,” said Steve Gupta, chairman and chief executive officer of The Gupta Group and president and CEO of the Easton’s Group of Hotels. “There will be about 20,000 square feet of retail on the first floor of the podium, and the second and third floors will have all of the amenities for the towers.”

The tallest towers in Vaughan will be built on the site of Easton’s Group’s Hilton Garden Inn, which will be torn down and relocated. They’ll combine to contain approximately 1,140 suites. There will be 12 units per floor, comprised of one three-bedroom, five two-bedroom plus dens and six one-bedroom plus dens.

ICONA will include a swimming pool, fitness centre, 4,000 square feet of outdoor amenities and 4,000-square-foot enclosed sky lounges on top of each building.

Gupta anticipates the retail component of ICONA will include coffee shops, restaurants, a convenience store and drug store, though that’s still to be decided.

“If someone has something unique that they want to sell, we don’t care as long as they pay their rent,” he said. “But it obviously has to be compatible to the building and should be able to help all the residents.”

Page+Steele/IBI Group Architects will be in charge of architectural design while Studio Munge will oversee interior design. Gupta hopes that construction can begin at the end of this year and he anticipates that ICONA should be completed and ready for move-in sometime in 2020.

While pricing hasn’t been revealed, Gupta said it will be appropriate for Vaughan.

“You get what you pay for. We put a lot of quality into our buildings and that will be reflected.”

Vaughan Metropolitan Centre is expected to include more than 1.5 million square feet of commercial office space, 750,000 square feet of new retail space and 12,000 residences as well as cultural spaces, hotels and entertainment venues when completed.

In addition to its close proximity to Highways 400, 407 and 7, the 442-acre Vaughan Metropolitan Centre site will be a hub for two separate bus services and connect to downtown Toronto by a subway extension that’s expected to be operational by the end of the year.

“Timing is everything in the construction business and right now is the right time,” Gupta said of the reasoning behind launching ICONA now.

Gupta is waiting for permits to start construction on its Yonge Park Plaza mixed-use development at 4050 Yonge St. in Toronto, which will include hotel, condominium office, restaurant and retail components. He’s hopeful of breaking ground this spring.

There are also plans for a large project in north Toronto, in close proximity to the recently renovated and enlarged Yorkdale Shopping Centre, Yorkdale subway station and Highway 401.

“It will be approximately a million square feet with three towers and about 1,300 units,” said Gupta. “There will be a hotel there also and some retail.

“We’re working with the City now and it should be coming maybe later this year.”

Gupta’s past and future

Gupta launched the Easton’s Group of Hotels in 1979 and its properties now include such brands as Hilton, Marriott and Holiday Inn in locations such as Montreal and downtown Toronto, Sudbury, Thunder Bay and Peterborough in Ontario.

The Gupta Group first entered the Toronto condo market in 2012 with its King Blue project, which was sold in 2014 to Shanghai, China-based Greenland Group, followed by Dundas Square Gardens and The Rosedale on Bloor.

Gupta anticipates further growth for his companies in both the hotel and condo sectors.

“We want niche projects in the right locations and at the right price,” he said.

“The market is good. Interest rates are low and even if they go up a quarter per cent or half a per cent, it’s not going to make that big a difference.”